Intimate Portrait
Bespoke Books
Hsu Wai-lun & So Lai-ping, Somely
2021
01
Every handmade book is unique, so I see it as an art creation and not design.

For a book to come into being, as essential as authorship are aspects of editing, book design, printing and book binding. Next time when you actually pick up a book, do pay attention to its material, delve deeper into understanding its cover design, and savour the seamless integration of text and visual language. In fact, these intricate details throughout a book often come from the vision and dedicated efforts of a book designer.

Graduates from the Visual Arts Academy of Hong Kong Baptist University (HKBU AVA), communication designer Somely So and visual and sound artist Hsu Wai Lun both chose to further studies in Europe (Germany and the Netherlands respectively). They co-established mmmmor studio (L7-04) to promote book arts, through which they explore the dissipation of language, history and personal identity.

J: How did you two meet?

H: We met some years ago while coordinating a photography exhibition related to the visually impaired. It was our first collaboration, with me as project coordinator and she as designer. We later became colleagues at HKBU AVA, as part of the creative team under artist Wong Suk-ki’s project A Living Space – The Homes of Pak Sha O. From site visit to publication, this arts and research project spanned two years.

J: What is the appeal of book as an art form ? Which areas do you each specialise in, and how do you collaborate?

H: Printed books, compared to most art mediums, are relatively timeless, adaptable and enjoy a wider distribution unconstrained by time and space.

S: Every handmade book is unique, so I see it as an art creation and not design. I used to work for the local literary magazine Fleurs des Lettres, thus am more adept at handling text, while Wai-lun specialises in images. However, we usually conceive the concepts, discuss the content, test the materials and implement the projects together. There is no clear division of labour.

J: Wai-lun, why did you choose The Rise of Modern China as the subject of your work? 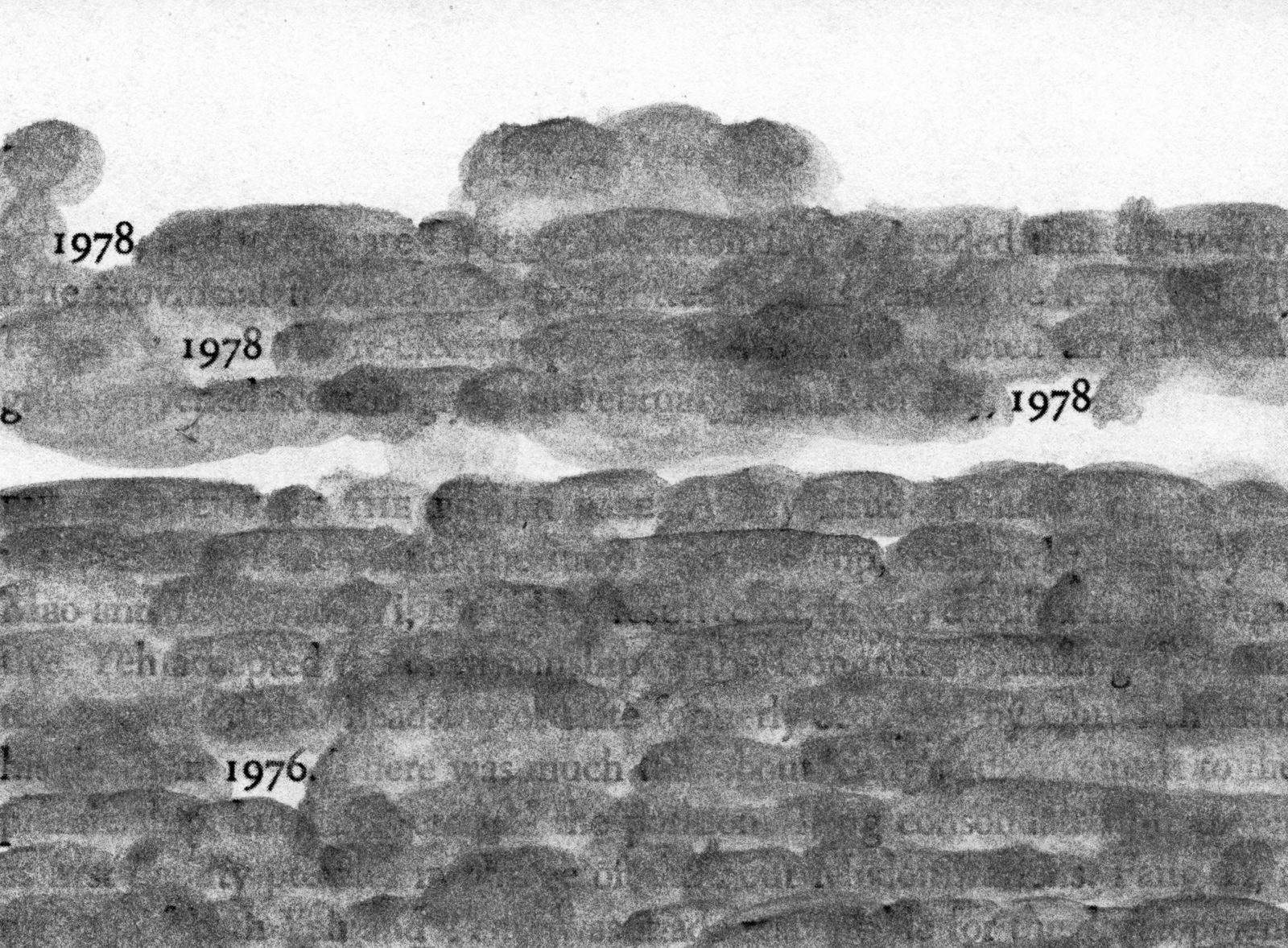 H: The Rise of Modern China was originally published in the United States in 1970, and used to be included in the A-level curriculum of secondary schools in Hong Kong . The Chinese version printed in traditional characters was published in Hong Kong in 2001, whereas the version in simplified Chinese was published in mainland China in 2008. However, in the simplified Chinese edition, over 200 pages of content had been edited out. This inspired me to recreate the redacted pages to re-enact the erasure, leaving only the years (in Gregorian calendar) behind. My edition of The Rise of Modern China was published in 2018, hoping to elicit reflections on censorship and historiography. All the copies were hand-bound with blackened binding gauze, as if the book cover has been torn out, to show a sense of incompleteness. 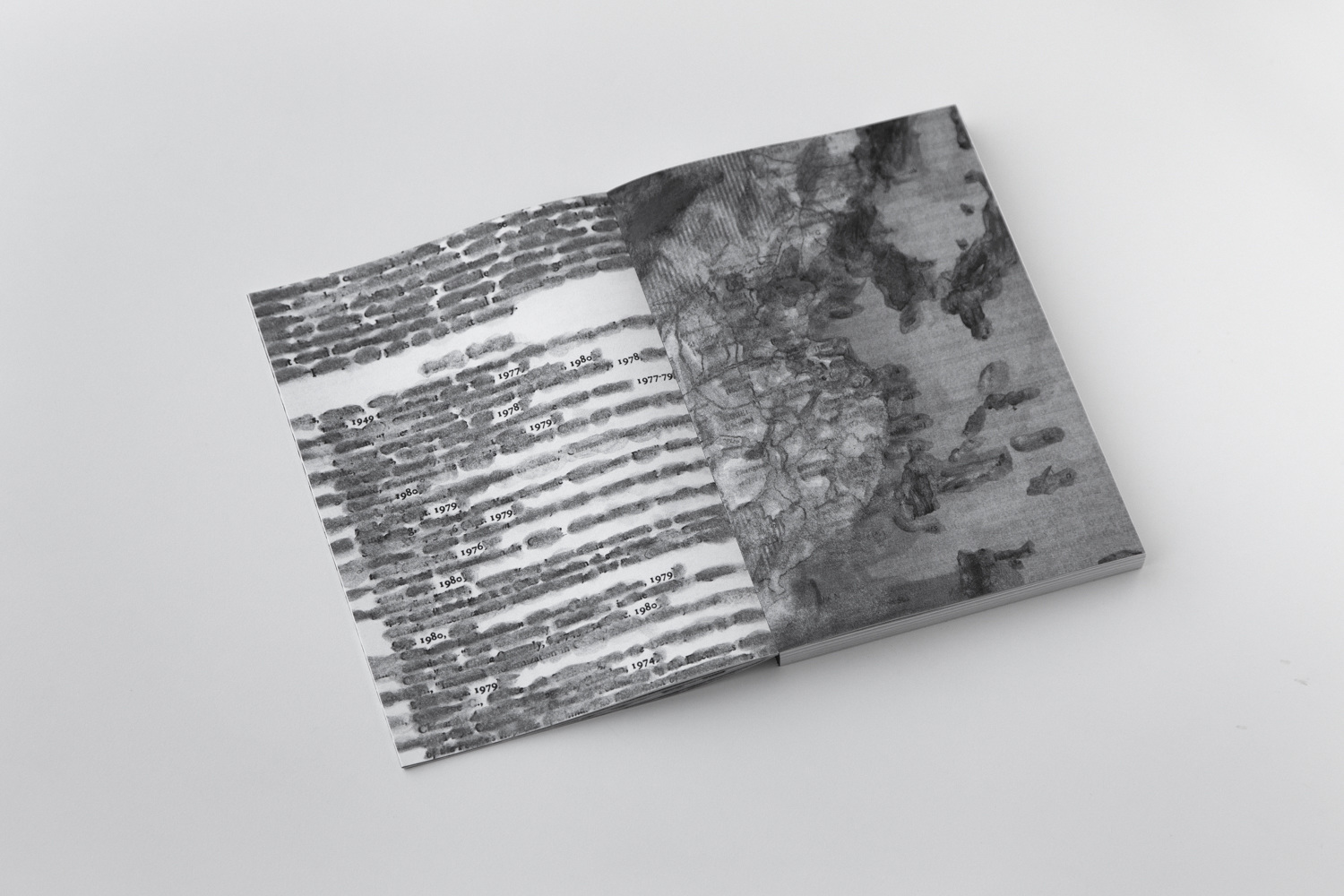 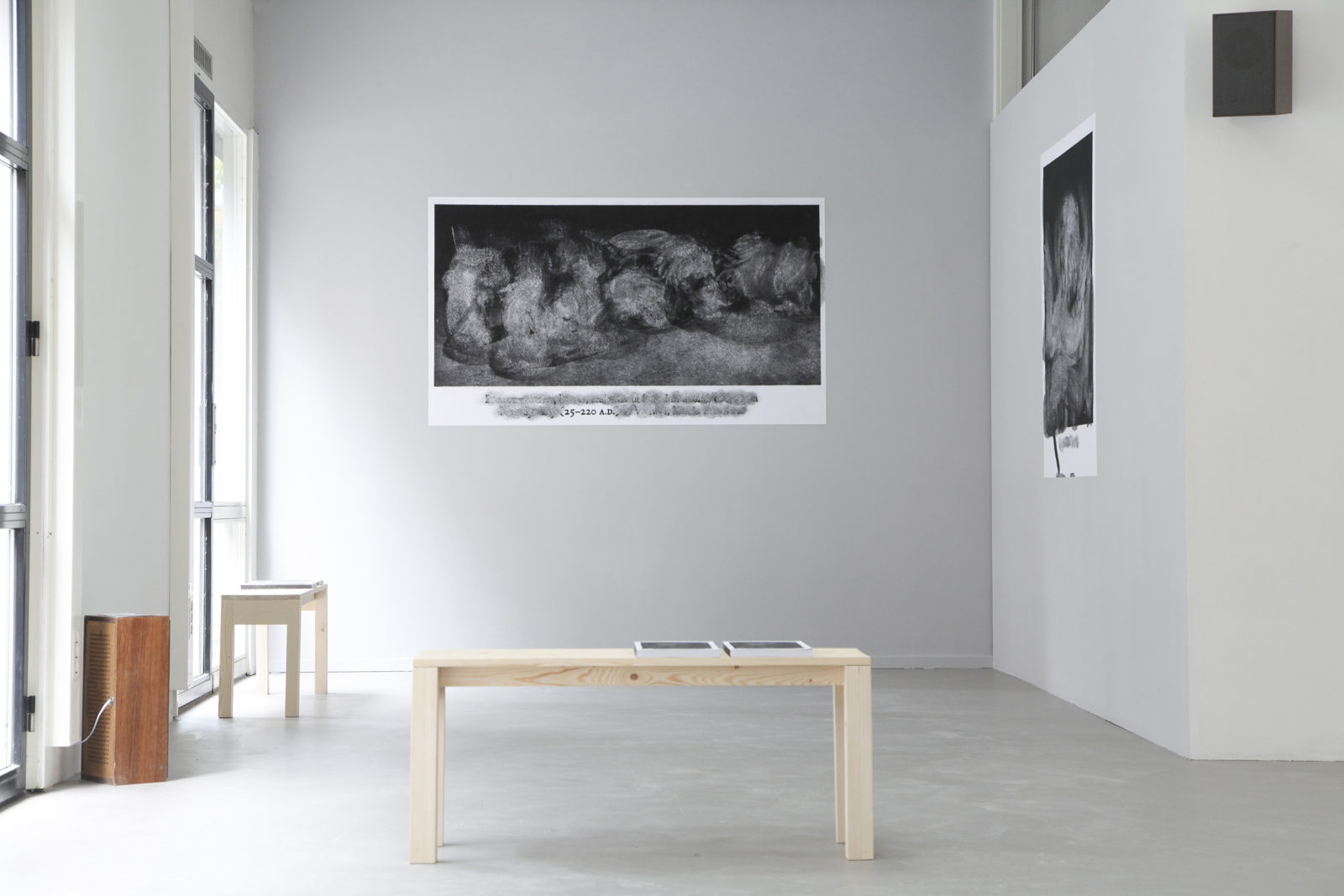 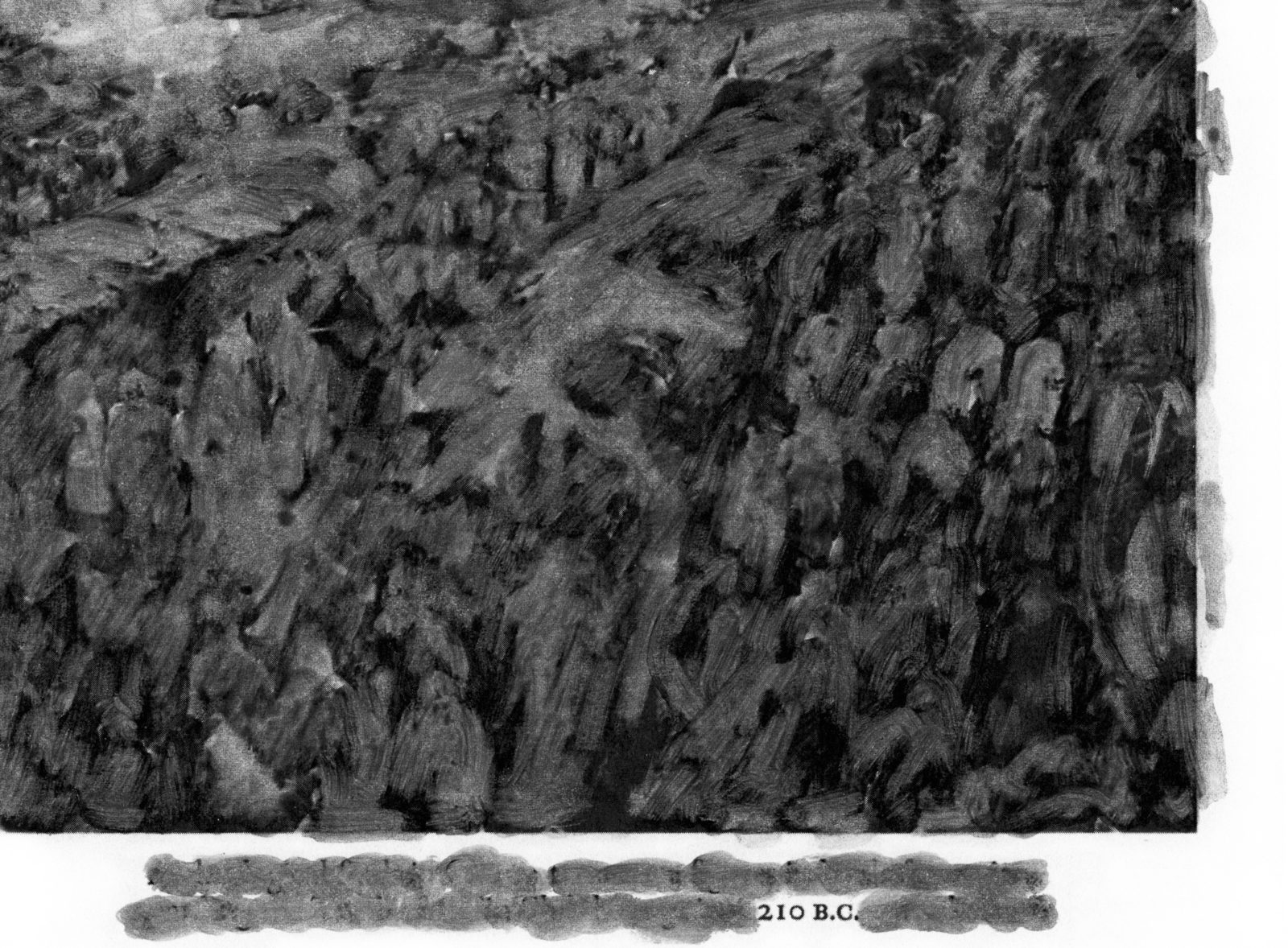 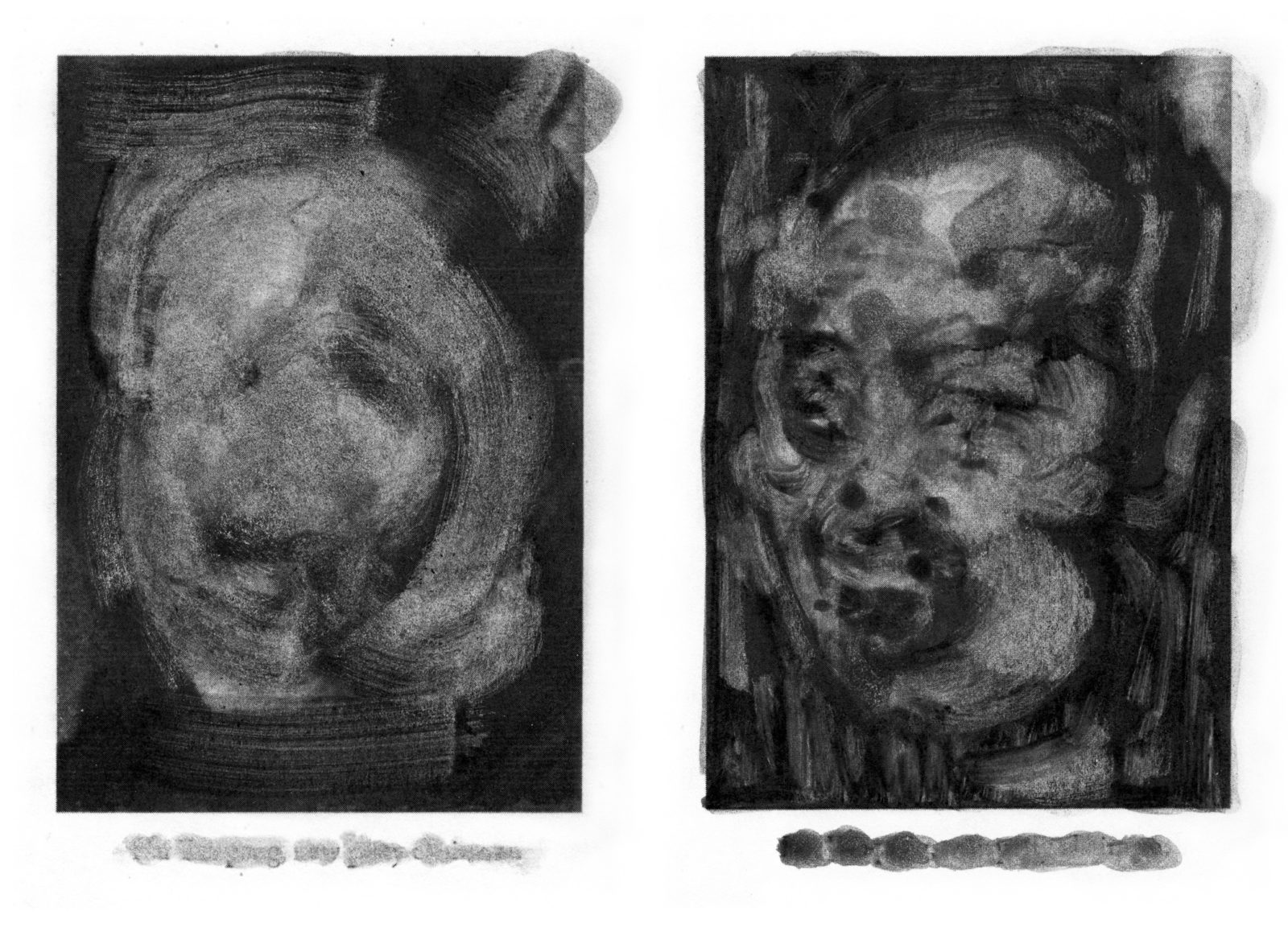 J: Somely, could you share your experiences working at Buchbinderei Mergemeier, an established German book binding company, with us? What is your view on the future of physical books?

S: With the aspiration to broaden my horizon, I enrolled in a Master’s degree at Mainz in Germany . Mainz was also where The Gutenberg Bible, the earliest book printed using movable metal type, was printed. There are still many print houses and book binding companies in the city. I was amused by how they can produce over 100 copies of handmade book in a short period of time. Out of curiosity, I worked at one of the traditional book binding companies for half a year, acquiring various hand-bookbinding skills, while also gaining knowledge on the characteristics of different types of paper.

In Germany, book binding and restoration is a profession on its own. Meanwhile, Hong Kong promotes “one-stop services” for printing and binding, which forgoes customisation and flexibility.

When e-books first became popular, people debated on whether it would render physical books obsolete. Looking at it now, although there may have been a decrease in printed volume for physical books, they have now become more like collectibles, so that more emphasis is placed on design quality. While the widespread use of the internet empowers information dissemination, it also allows information to be easily edited or erased. That’s not the case with physical books – once published, changes can only be made when reprinting. Publications leave permanent marks, sources of information are therefore more easily traceable. Therefore, the importance of physical books cannot be replaced.

J: Could you share more on the book design and layout of A Living Space?

H: A Living Space consists of oral history, documents and old photographs from the villagers, as well as illustrations and photographs by various artists. It is a detailed archive about Pak Sha O, the well-preserved Hakka village in Sai Kung. As the village was built along the river, aerial view of the river is featured on the book cover through printing on the reverse side and embossing.

S: To make this bilingual book easy to read, the English portions are arranged in the form of inserts placed between chapters. The book binding is different from conventional hardcover books, in which the covers are larger than the pages held. In this case, the covers are aligned with the pages to have a neater appearance.

J: Are there any other projects you find particularly memorable or interesting?

S: For the book cover design of Gaga Feminism: Sex, Gender, and the End of Normal, which takes American pop singer Lady Gaga as the new feminist symbol to explore sexual fluidity and liberation, we employ a semi-transparent paper for the book jacket, and cover part of the book title / keywords with scratch-off paint. Scratch it off or not – it is up to the readers to decide how much they want to “expose”. This playful, interactive idea is inspired by Lady Gaga’s music video Telephone, in which she puts on a see-through skirt and covers up her nipples with tapes.

I have always been interested in the relationship between language and design. In foreign countries, I could always find posters with Chinese characters but obviously designed by non-Chinese speakers. I wondered if designers are truly able to design in languages they do not understand, even with the advent of instant translation and advanced design software. This inspired my research topic for my master’s dissertation, for which I develop typography and book cover designs using a foreign language – Hebrew. Then, I asked for feedback from Israeli designers. Although their comments proved that a lack of understanding in the language may not affect the outcome, I still think it necessary to grasp the content in order to produce a suitable design.

H: Apart from book arts and video works, I also study sounds – how they are used to draw territory and reinforce national identity. Examples include playing the national anthem before a ball game, South Korea blasting K-pop at North Korea, and shopping centre using mosquito alarm that emits sound at high frequency to drive away teenagers.

While I was in the Netherlands, I created Affirmative Resonance, referring to the gesture of hand-clapping that reinforces the legitimacy of a group and its identity patterns at certain occasions. For example, when I saw at the handover ceremony in Hong Kong the prolonged plaudits which followed the hoisting of the Chinese national flag, it only brought to my mind the story of how officials under Stalin’s rule would go into long applause only because they were afraid to stop. 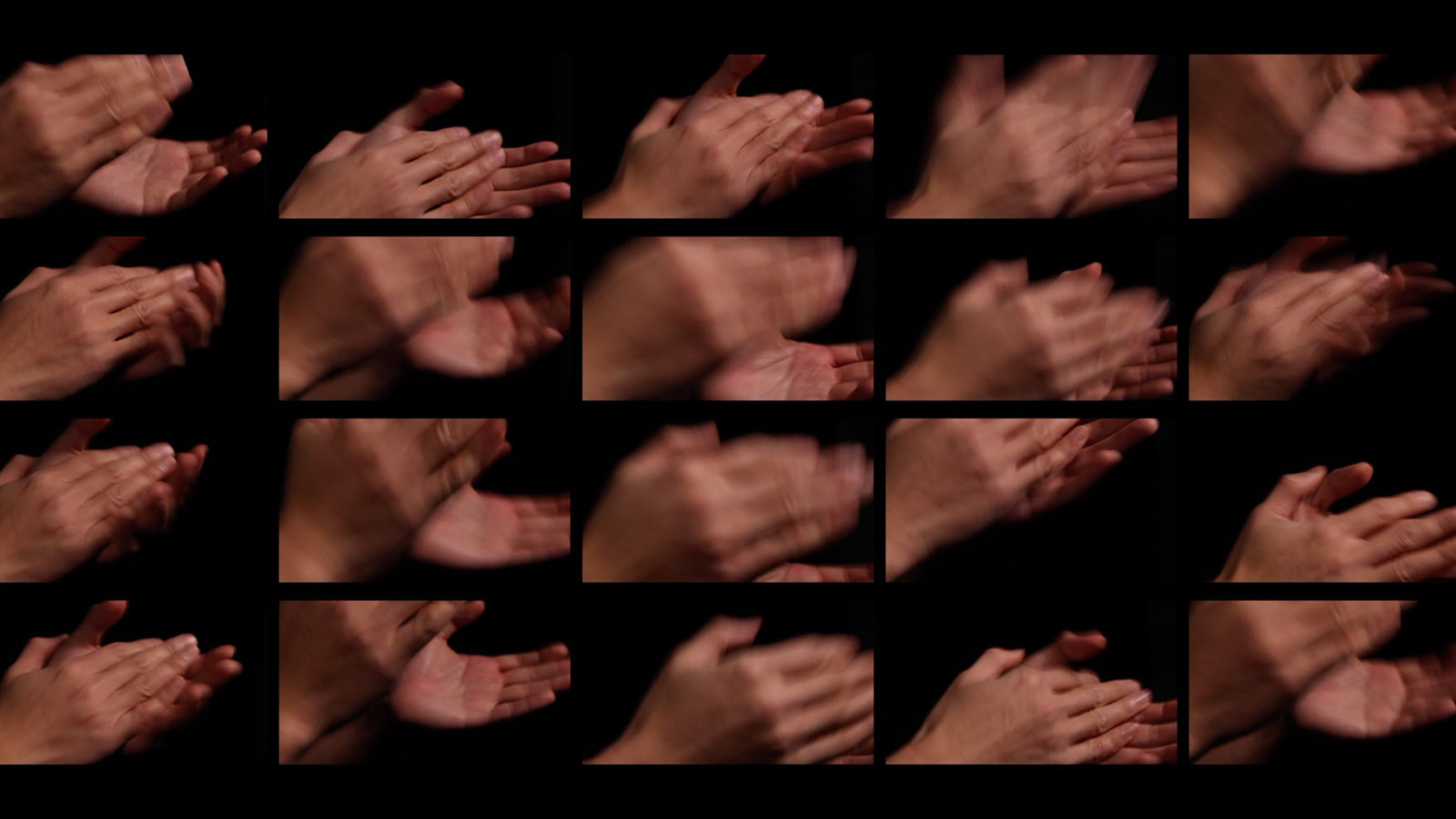 J: Any new projects coming up?

S: We are researching on dying languages (such as Nüshu), and looking to present them in a series of handmade books with long-lost book binding techniques.

H: Economics is the driver of the decline in handmade books and even certain languages (e.g. the Gaelic language). Industrial printing allows mass production, rendering high-cost, handmade books uneconomical to produce and falling out of demand. The same goes for languages, when we consider the majority of people choosing to learn English or Mandarin for reasons of better career prospects.