Intimate Portrait
Rage Against The Tranquil Night
Cheung Tsz-ki, Jacky
2020
04
I believe that art is valuable for its ability to express emotions, touch people’s heart and resonate with others.

“Do not go gentle into that good night, Old age should burn and rave at close of day; Rage, rage against the dying of the light.” – Dylan Thomas

Darkness falls like a curtain at night, draped over the cityscape, and so we called it nightfall. Fascinated by the nightscape, emerging artist Cheung Tsz-ki, Jacky (L6-30), a graduate of the Department of Fine Arts at The Chinese University of Hong Kong, captures the imageries of night with his works. Created with mezzotint copper plate and black ink, his works are tinted with subtle shades, dimness and a sense of mystique, just like the nightfall.

While Cheung’s previous works tend to “go gentle” into that serene night of clouds and moon, recent social events have “sparked a fire” in his visual language. 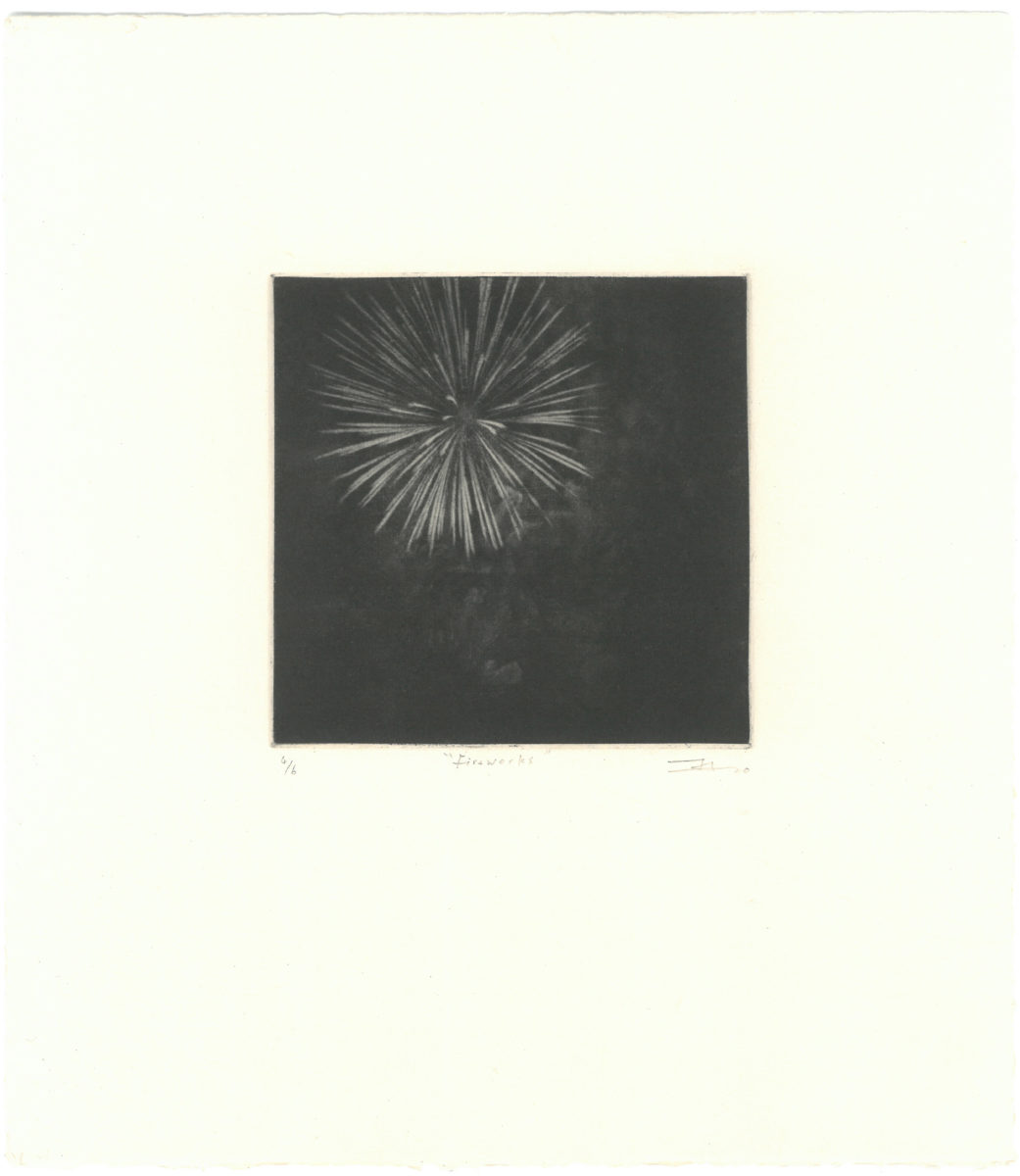 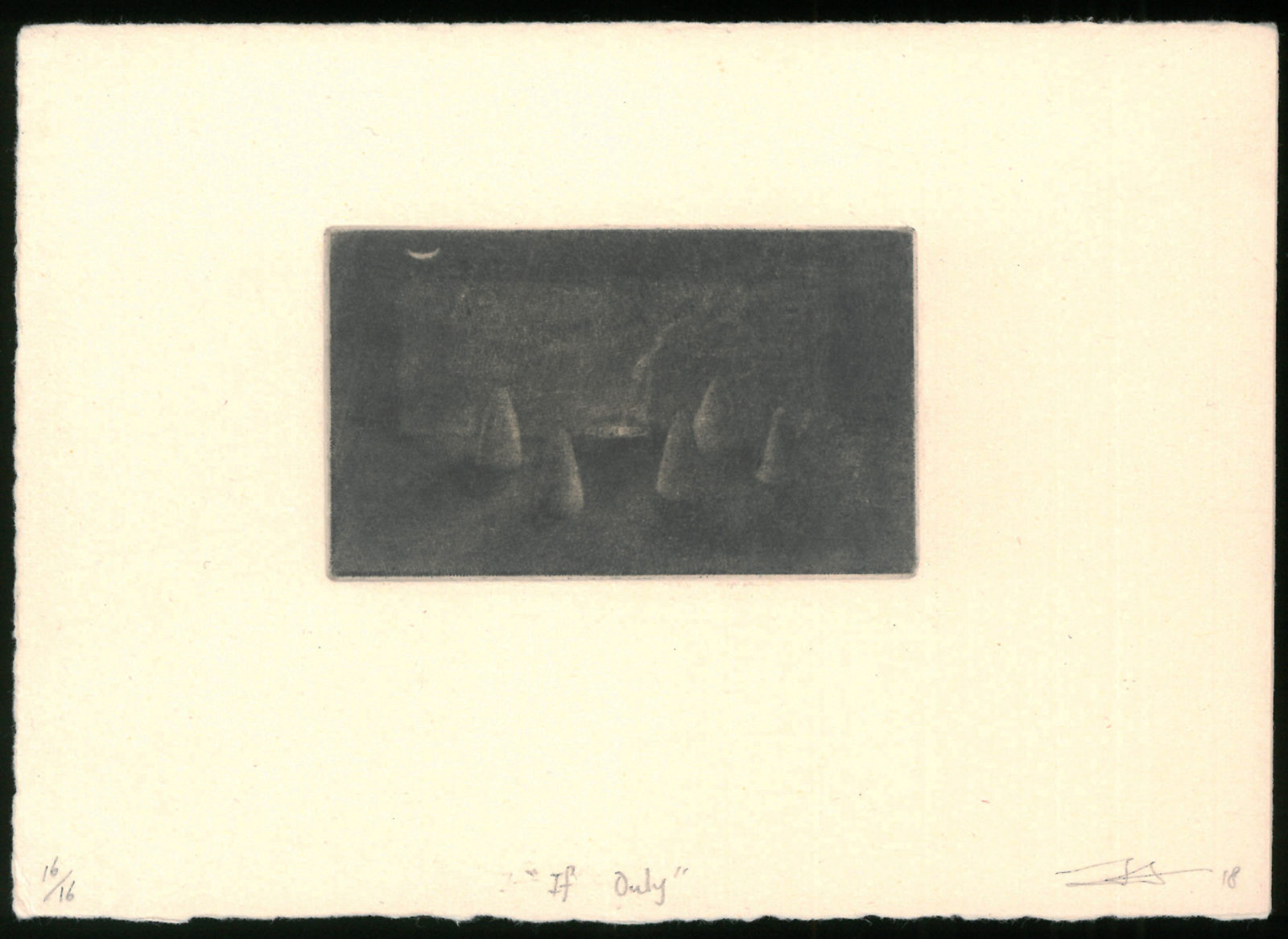 C: My views on art change in different phases of my life. When I was younger, I viewed it as a channel for self-realisation; but after graduation, I became somewhat dismissive about art because I struggle to see how art can change the society. Now, I believe that art is valuable for its ability to express emotions, touch people’s heart and resonate with others.

Art is something from within me, and I seek to create things that are close to my thoughts and feelings. The works, therefore, do have some elements of self-projection. Although art can be a direct reflection of concepts or ideas, I do think they need to be materialised to become meaningful. This is perhaps the difference between art and philosophy. As for creative mediums, besides printmaking, I am also involved in painting, installation art etc.

J: What are the distinct qualities printmaking offers but not other mediums?

C: For mediums like painting, sculpture and installation art, it is often easier for creators to observe whether they are achieving intended effect as they create, and it is relatively easier to build up the mood of the environment with different techniques. In printmaking, it takes more time to receive the “feedback” and get the outcome (results are seen only when prints are made). However, it is essentially the process, which requires repeated trials, plate-making, printing and composing, that is highly enjoyable.

J: What are the challenging and interesting aspects of mezzotint?

C: Mezzotint is an intaglio printing technique (with image incised into a surface). Its main tool is a rocker that “scrapes” the copper plate to create a matte-like effect, the plate is then further scraped/burnished to create the image. The ink stays at the matted surface while the smooth areas are left blank. Some people find the works of mezzotint printmaking and sketching similar, as they both create fine lines, clear gradients and smooth textures.

The difficulty in producing mezzotint prints lies in patience – eight layers of “matting” are required for the copper plate; and uncertainty – it is often difficult to see the image clearly during the plate-making process, and the prints may not turn out as expected.

J: What is your favourite piece of work?

C: My favourite is Last. It depicts the scenery of the descending moon outside my window at home. I also find Yet to be No.5 quite special, as it is from the memories of my graduation trip to Sri Lanka with my university coursemates. We all wanted to visit a less popular destination and in the end came down to Sri Lanka. Its exotic culture and scenery have etched in my mind and inspired my works.

Other than large-scale works, I also like to produce small-sized prints, such as printmaking Christmas cards – L630 and If Only. The former is an idealised appearance of my studio while the latter tells the story of a tree being burned. Small prints can be held in your hands, thus they feel more intimate than large-sized works, which are often only viewed from a distance. 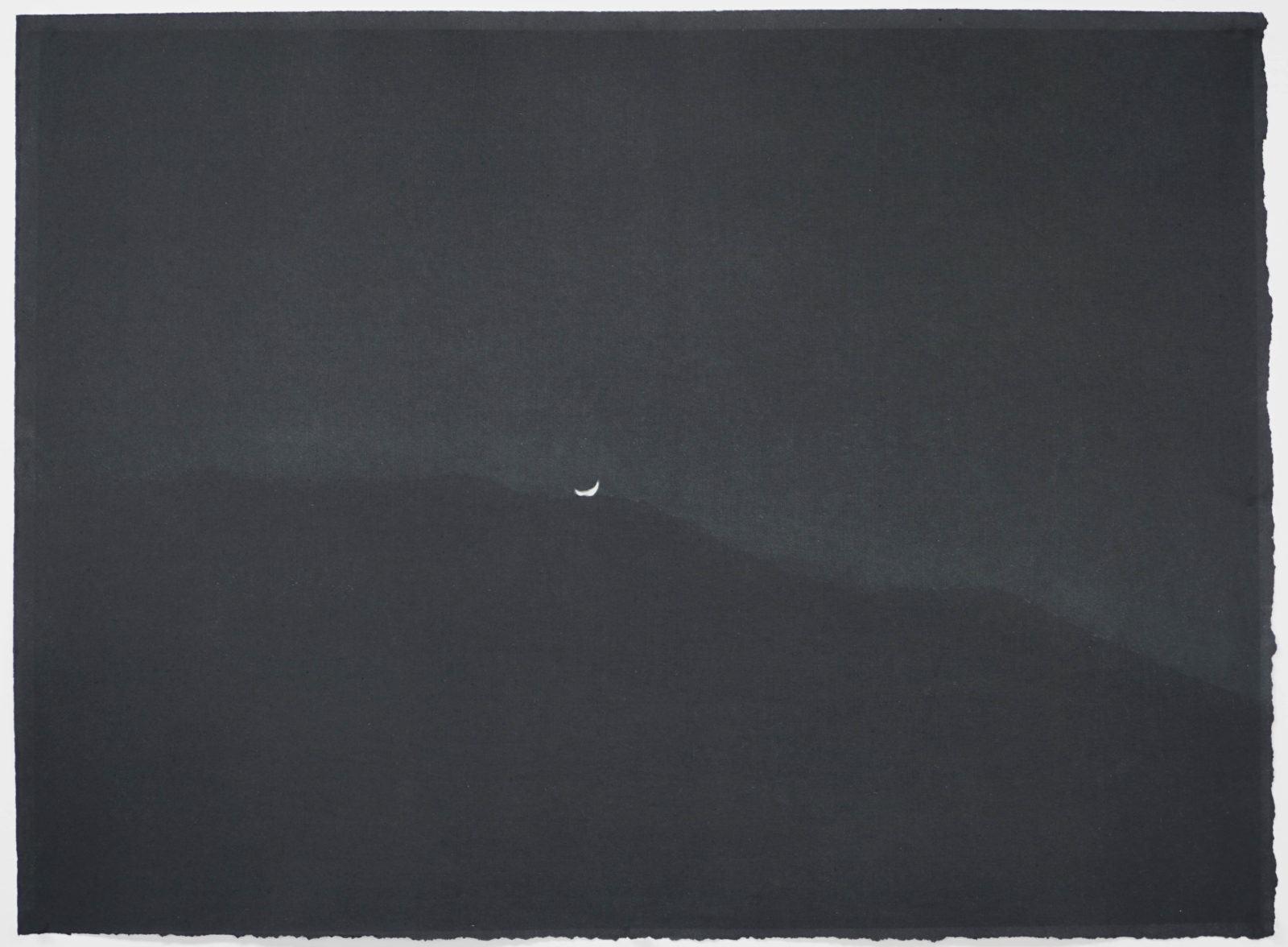 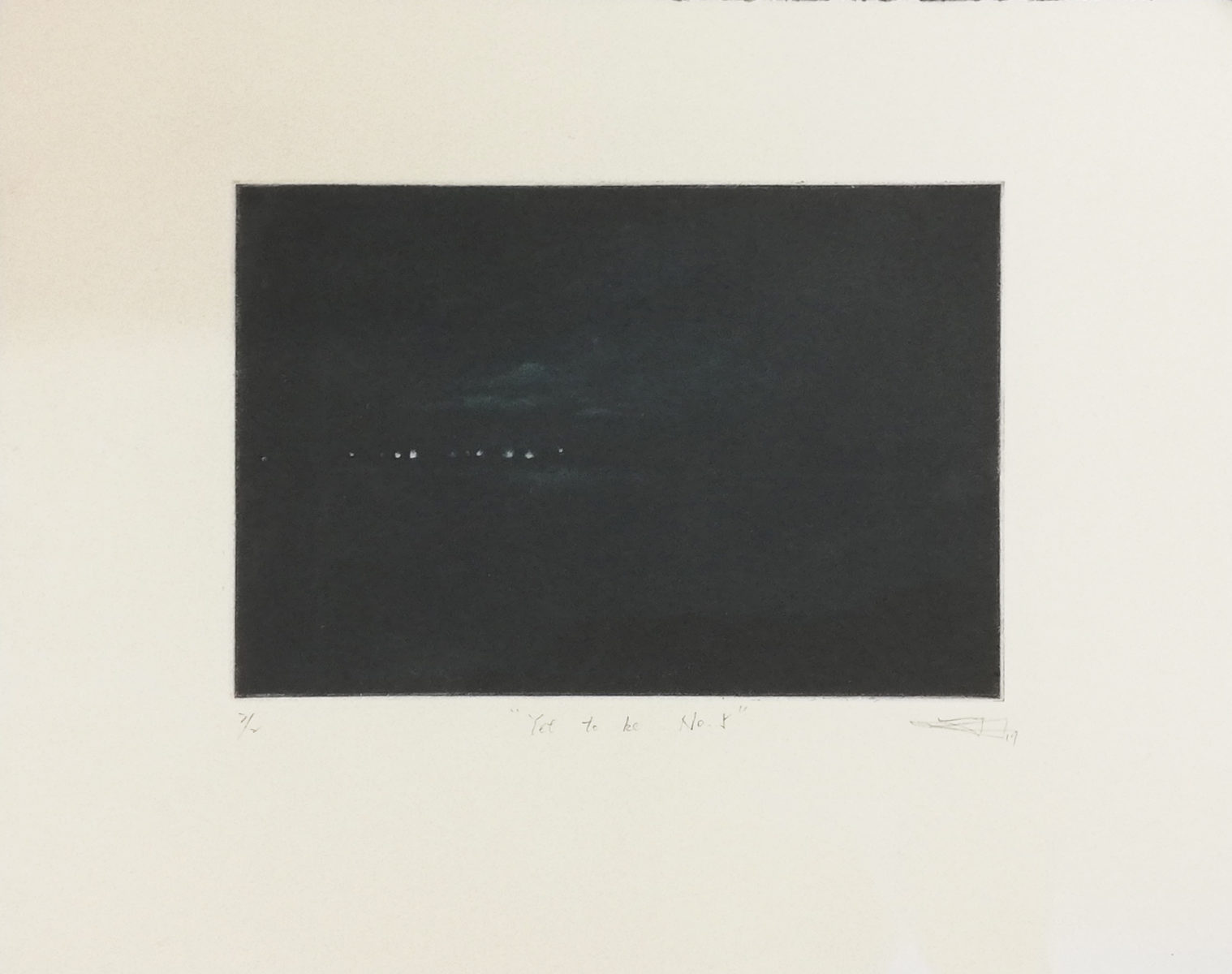 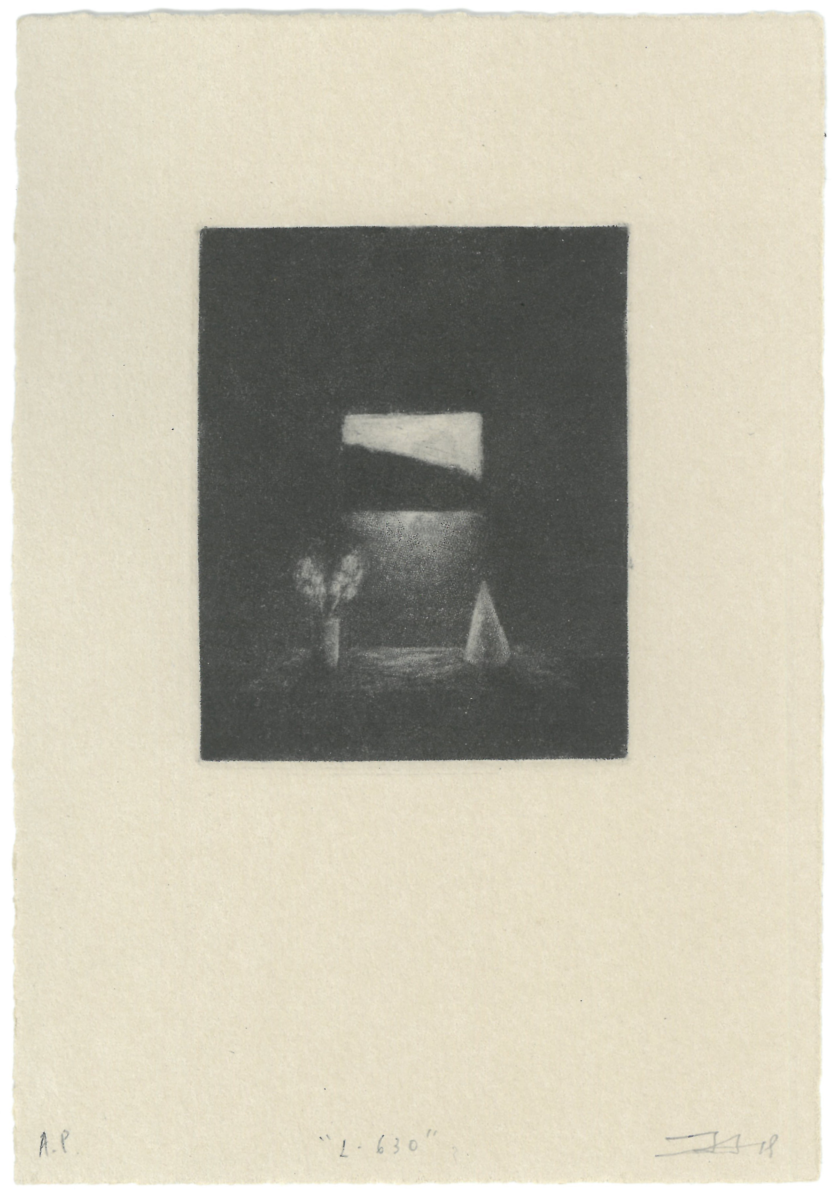 J: As one of the awardees in the Printmaking Residency Programme 2018-19, organised by Hong Kong Open Printshop (HKOP, L8-06), your works were featured in various exhibitions. Can you tell us more on that experience?

C: I held a solo exhibition “Whence it comes” at the HKOP. The subject matters of the exhibition (clouds, moon and cotton, etc.) were not the focus, but rather plot devices that help create a relaxed ambience. There is no need for the audience to fathom the content of the works, as it is more about feeling with their hearts. I hope that through the act of “gazing”, they can let go of their emotions and find tranquility.

J: Tell us more about your upcoming exhibition “The Sea Keeps Burning” at PMQ with Chan Cheuk-yan, Glo. What inspired you to adopt fire and sea as core elements?

C: Hong Kongers have experienced quite a lot in recent months, with a multitude of indescribable thoughts and scenes, among them, the appearance of fire on televised news captivated me. In this exhibition, I attempt to use images of fire as a response to the society and the restlessness we faced – while fire devours all, how much anguish, anger and listlessness does it encapsulates?

The imagery of fire is not only rich and diverse, but also a familiar one that associates with a variety of scenes. It can be warfare, firework, even birthday celebrations. Fire is also a denouement of Hirokazu Koreeda’s film The Third Murder, as well as various religious rituals such as burnt offerings and the Kandy Esala Perahera (parade with men carrying fire torches) in Sri Lanka. Fire has always felt ephemeral – no matter how big a fire is, it will eventually extinguish. However, the “Door to Hell” in Turkmenistan (Darvaza gas crater) has been burning for nearly 50 years. The notion that perhaps fire can be eternal inspired me to create a zine called The Door to Hell, with images of fire juxtaposed against lyrics from the Cantonese song Ten Fire-fighting Teenagers from Tat Ming Pair.

Meanwhile, Glo chose the “sea” in this duo exhibition because of its all-embracing character and capacity. It nurtures and devours life at the same time, and is a cycle that contains both the good and evil. Looking at the bigger picture, the recent social disruptions in Hong Kong may just be a drop of water in the the torrent of history. The sea also provides countless inspirations – some believes that it represents freedom, others suggest that it is a place where planes descend.

The Door to Hell

Water and fire are incompatible by nature, but the paradox of “the sea keeps burning” may very well reflect the current social situation. No matter how absurd things appear, the world carries on as usual.

J: How does the cooperation between you two work?

C: When the presenter approached Glo for this exhibition series, she invited me to join because our works alludes similar ambience. We met during the HKOP residency programme, and discovered that both of our works are themed around night-time. Mine are mostly on scenery whereas hers is on the cityscape. Our works are also similar in mood, as we are both more focused on creating an atmosphere instead of the subject matter. And now, as we both want to deal with social issues and collective emotions through our works, this exhibition becomes a great opportunity for collaboration.

Even though our chosen mediums of expression may be different – hers being photography while mine is printmaking, our visions are largely similar. For the exhibition set-up, we do not seek to single out or separate our works; instead, we hope to mingle our works and build a complete and harmonious environment where audience can experience different emotions.