Intimate Portrait
Transforming Trash into Treasure
Lam Yau-sum
2020
10
I did not cherish nature then when it was abundant around me, but I long for rural life now that I live in a concrete jungle.

“New Trend Award” winner Lam Yau-sum is known for transforming circuit boards into canvasses and electric wires into trees, creating artworks which are widely acquired by collectors and museums alike. Through collecting, assembling and painting on materials derived from electronic waste, he breathes new life in trash, constructing a new cityscape with his unique artistic vision.

What do you pursue in art? Why use circuit board, electronic parts and metal scraps as your source of materials?

I started my art training as a painting major at Hong Kong Art School. Compared to the flat surface on canvas, however, I find the world of electronic parts more appealing. My uncle works in repairing electrical appliances, thus I have always been immersed in and fascinated with disassembling appliances since I was young, and attempted to make all sorts of gadgets with the motors I extracted. For a school project on artificial intelligence, I integrated circuit board in my paintings. After graduation, I began creating sculptures from various electronic components and metal scraps.

Spatial Map is my first attempt to paint on a circuit board. The circuits resemble a complex transportation network on a city map, while the array of LEDs are like twinkling stars in the night sky. Thus, the work looks like two overlapping spaces. Initially, my works are more abstract, for example in Landscape,– I fused oil painting with the imagery of Chinese landscape and the routing on circuit boards. Later, I gradually turned from abstract to concrete, and conjured up animal patterns such as rooster and fish from the circuits.

In addition to painting on circuit boards, I also mix and match different components like “Lego bricks” to create sculptural works. I have even extracted tin from the boards and remoulded it to form the base of another sculpture. 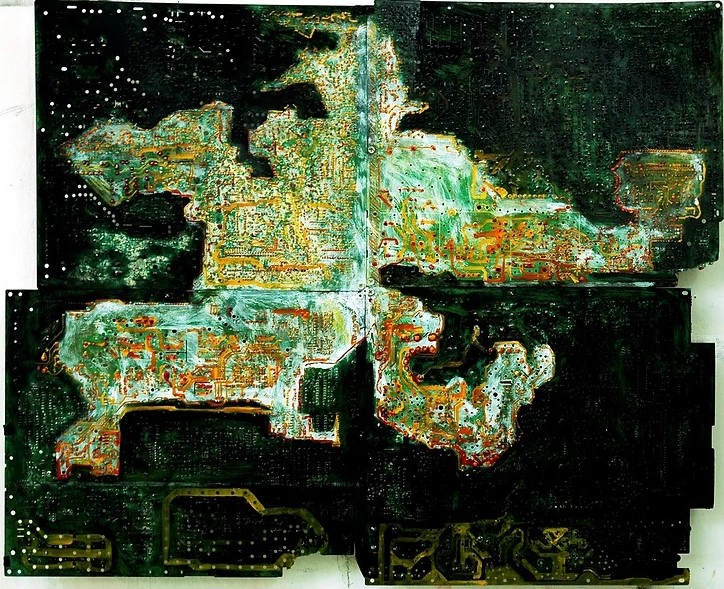 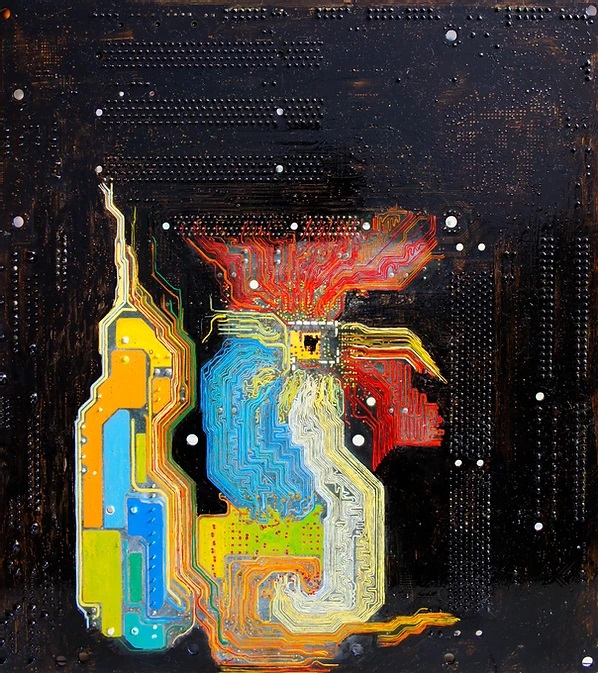 How did you come to create these unique “bonsai” works? What is special about them?

The idea of “bonsai” did not enter my mind initially. I just like to make trees out of copper wires, and USB sockets and power plugs are ideal containers for them, making them modular and portable. Collectors could assemble them as they like and create a mobile city of their own. However, I thought the copper branches looked a bit dead and so the idea came to me to start watering them every day, until a green patina gradually formed on them due to oxidation, as if they have become organic and alive

Where do you find inspiration for your works?

My studio used to be located in an industrial building in Kwun Tong, with views of no sky but just a concrete jungle of row upon row of other similar buildings. I could not help but wonder what landscape means for city dwellers. However, plants were thriving around the leaky joints of the external pipes on the façade of the opposite building, creating a layered effect quite like a Chinese landscape painting. This inspired me to create Tree Tower, Metal Tree and Yuan series*, using components such as copper water pipes and air conditioner radiators.

As a getaway from the city, I often go hiking in the countryside, which inspired my creation of the Country Explorer series. One of the works included part of a large paraffin lamp I found when camping at Sham Wan. The super typhoon Mangkhut in 2018 also inspired me to create some of the works in A Tree Protects? series, which explored whether broken or withered trees could still provide shelter for people. 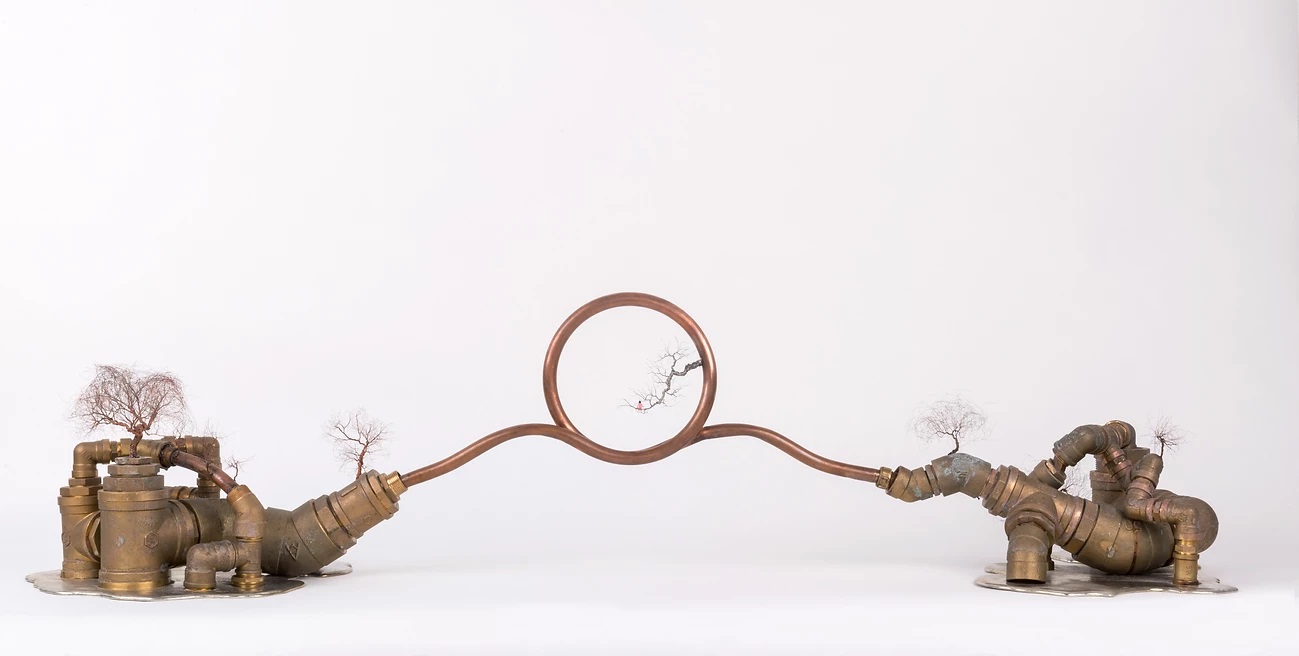 How do you go about collecting the materials?

Mainly from recycling, including leftover scraps from renovation projects, and radios, computers and video recorders I salvaged from my friends bins. Someone even gave me a bunch of useless RAM sticks. I sometimes go treasure hunting at Apliu Street as well.

Could you share with us your insights or experiences from the many local and overseas exhibitions that you have participated in?

My most memorable experience was a three-month artist-in-residency at Taiwan’s Folio Hotel, which was renovated from a staff dormitory. Funny enough, the beds in the hotel room would be folded up on weekends so the rooms could be opened up for studio visits and markets stalls. During my stay, I was able to collect some quirky components, complete several works and presented my solo exhibition at Taipei’s Fish Art Centre.

My impression of the Taiwanese is a people that are enthusiastic and talkative. They are very passionate about arts, as someone once told me: there are more artists than farmers in Taiwan. When compared to people in mainland China and Hong Kong, they have more patience in understanding your works.

It is indeed touching to meet like-minded people that appreciate your works. I am also grateful for the support from Grotto Fine Art over the last decade, which made my participation in many local and overseas exhibitions possible.

Could you tell us more about “Floating Mountains”, your upcoming solo exhibition at PMQ? 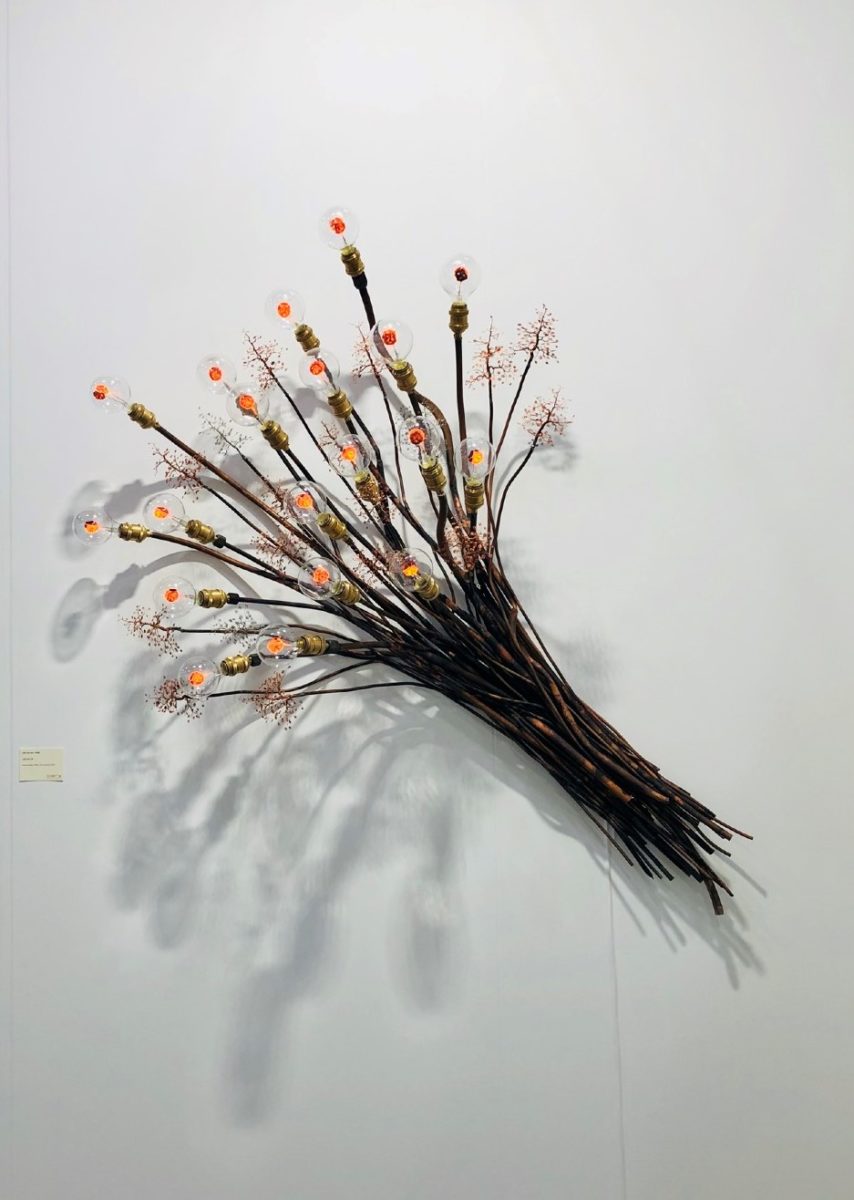 The exhibition will feature a “flower bouquet” and five “trees”. The flowers of Light and Life are made of copper plates which emanate fascinating hues when lit inside light bulbs. The trees/forest are made of electric wires that have been delicately soldered together. Through these sculptures created by ready-made objects, I wish to probe into the mutating city habitats. What do you think of nature?

I grew up in the countryside when I was a child. My house then was surrounded by farmland, and I would collect bamboo branches to make toys such as dragonfly traps and firecracker launchers. I did not cherish nature then when it was abundant around me, but I long for rural life now that I live in a concrete jungle. In my spare time, I take care of the various plants on my balcony, including chinaberry, cactus, peaches, and vegetables like green peppers and gourds. Any plans for the future?

I will have a solo exhibition “Dewflower” in Taiwan in November 2020. I am also preparing for a collaboration with Reading Mi, a bookstore in Dongguan next year. Hopefully, I could include more interactive elements in my works; one that I am currently working on involves a motion detector which projects messages when people come close to the work.