Intimate Portrait
Seeing the
Bigger Picture
Tse Chi-tak, Ducky
2018
11
Art, including photography, is life. But I do not believe that art should be perceived as something too high up there in the clouds – rather, it should be seen as it is, and the process is almost like a religious practice.

There is a saying that there are three levels of seeing: seeing the superficial, seeing through the superficial, and seeing beyond. After having worked as a photojournalist and professional photographer for many years in the industry, Tse Chi-tak (a.k.a. Ducky) decided to transform all that he has seen into photos and artworks – all the good old days he has seen, landscapes he has seen through, as well as mindsets and identity crises he has transcended from.  Through his lens, he tells stories of the people of Hong Kong, preserving our collective memories. Despite grasping a full view, Tse chooses to stick to his purest and most original intentions: to record and archive happenings as they naturally proceed.

Winner of numerous photojournalistic competitions organised by the Hong Kong Press Photographers’ Association, Tse is a veteran in the industry whose works are collected by the Hong Kong Heritage Museum. Well-known for his social documentary photography, Tse refused to rest on his laurels. Instead, he seeks to expand his horizon and constantly explores the multifaceted possibilities of expression through art.

J: Since when did you pick up the camera? Why photography?

T: Life was simple when I was in secondary school. A relative had given me a camera, and because it was the only “toy” I could get hold of, photography became my hobby.

”All That. Doesn’t” Series

J: You used to be a photojournalist. Now you have become an artist. What is the difference?

T: A photojournalist has to face diverse work tasks in and out of office everyday. It was a very challenging job because most of the time one has absolutely zero control on the subject matter. Back in the days, the work of a photojournalist was, to some extent, comparable to submitting assignments – one has to complete missions assigned to them. The work brief usually came with very clear guidelines, pre-designated shooting angles and “formulae” (as in certain kinds of news shoots a fix set of angles are always called for). For example if the Governor was appearing in public engagements in pre-1997 Hong Kong, our instructions would be to capture his friendly interactions with the people. But most importantly, the visuals have to convey some sort of a strong message or idea to the readers. As an artist, I can control many more things by myself. However, while there is more flexibility and freedom in being an artist, the chance for failure is also higher. Also, one has to keep searching and exploring, and be responsible for the quality of his or her own work.

J: Your works often focus on social issues – is that a conscious decision or purely a coincidence?

T: I have stumbled upon various social issues quite by accident rather than as a result of intentional pursuit. For example, learning from my friend about the West Kowloon Reclamation project, I did not realise how powerful a scene it would be until I witnessed it. I ended up spending over 20 years making photo records of that place. Similarly, I had casually passed by the Queen’s Pier and happened to snap a few images shortly before the place was made to disappear. Most subjects in my photos are on the brink of disappearance, but then nothing is eternal in the world. Sometimes you do need to let go of things to pave way for change.

J: From the West Kowloon Reclamation Photo Project, the Choi Yuen Village to the Heaven King Earth and Queen, how do you define the purpose of your work?

T: I always learn something from my projects, such as how I should cope with my life. Art, including photography, is life. But I do not believe that art should be perceived as something too high up there in the clouds – rather, it should be seen as it is, and the process is almost like a religious practice. The Queen’s Pier demolition and Choi Yuen Village incident revealed the operating system and power struggle within the society. But is what we see the only truth? Is the power struggle behind really as straightforward as we know? Instead of singling out one event for quick judgment, we need to dig deeper and think thoroughly. Nowadays the society tends to look at things as just right or wrong, giving rise to extremism. However, what we should rather do is to calmly look at the full picture and analyse what it means – and that is what I learnt from each of my photography projects.

J: In 2018, you organised two exhibitions under the same series – “All That. Matters” and “All That. Doesn’t”, highlighting the stark contrast between the black and white films and the digital images and installations of today. What message did you intend to convey?

T: The Hong Kong Faces collection under “All That. Matters” series consists of mainly black and white images because that was more simple and straightforward. “Street snap” was already quite a popular style some 20 years ago, as a means to record bits and pieces of the city under that particular time and era, because we thought those fleeting moments would not last. This is one of the many faces of Hong Kong people, taken from the ordinary daily life without any political undertone. In trying to record things as if unaffected by the handover, there context become inexorably embedded within the process of the handover – what a paradox!

My work 20 years later (“All That. Doesn’t”) was inspired by the gradually disappearing city borders, as well as the fading identity of Hong Kong people. But there is no value judgement of good or bad, only nostalgia. After all, the handover was an inevitable process that cannot be stopped. It was a process that we had all taken part in, the only difference is that people cared mostly about economic and financial impact  –  the “central district value”. In other words, disappearance is just a phenomenon, but the meaning becomes greatly impactful when the two sets of works are juxtaposed.

As for the bicycle installation The Others – the bicycle itself was a carrier, driven to the border for visual projection. This particular means of delivery has proven its reliability through thick and thin along the course of Hong Kong history, driving itself through wide and narrow lanes around town. The television on the bicycle was produced in the 1970-80s, but was replaced with a transparent case. I feel that life back in those days was simpler and more transparent, when information was mostly obtained from the TV and the newspapers. Now, in the Internet Era, we often have to ask ourselves: which events are real, and which ones fake? Due to the flood in quantity and complexity of information we receive constantly – especially when information can be freely “tinkered” with when shared – we tend to judge way too superficially, and that is not a good habit. 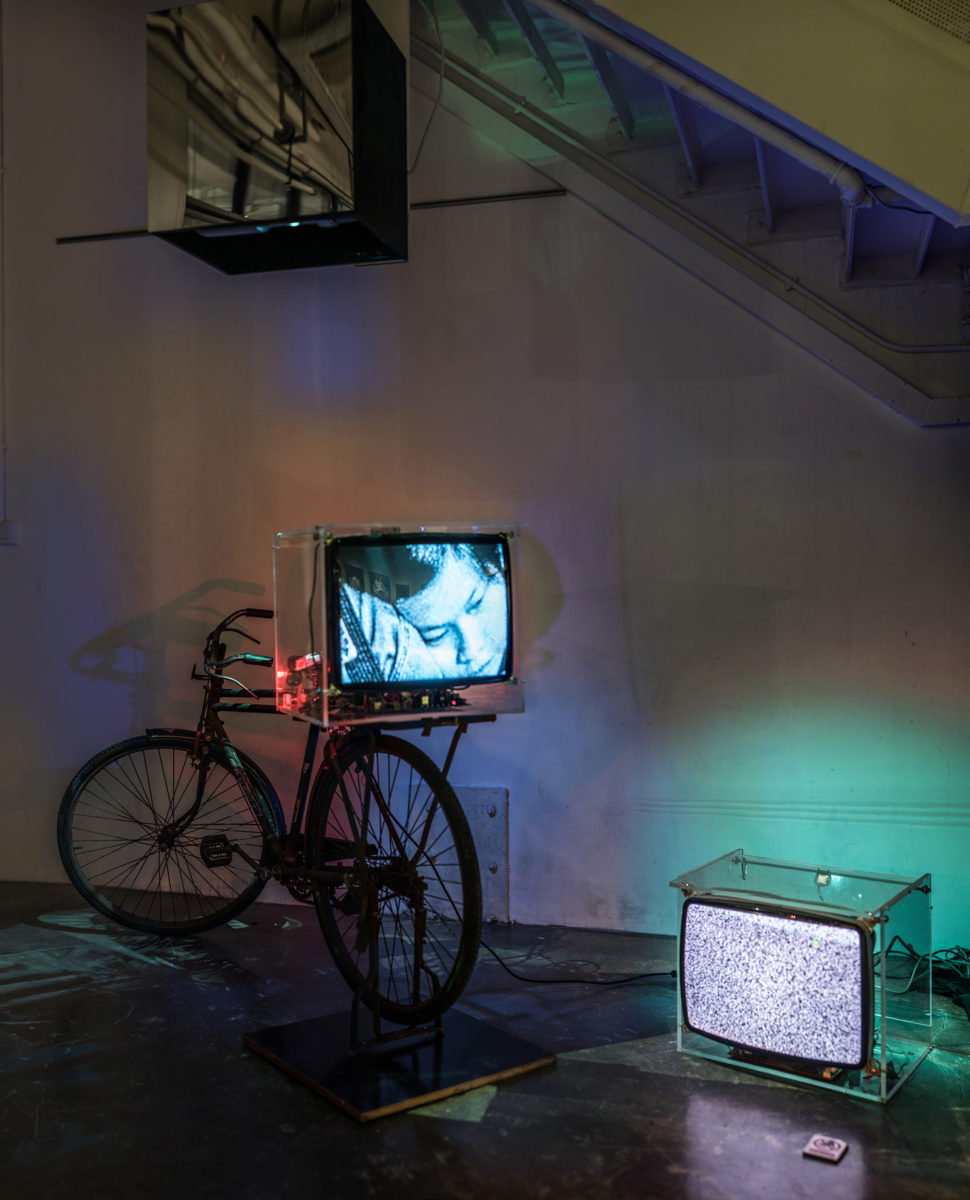 The Others
bicycle installation
Q6. J

J: What do you think about Hong Kong and how its people recognised their identity before and after the 1997 handover? Any comments and thoughts?

T: I think people’s identity in Hong Kong is somewhat forced under challenging circumstances. Being a Hong Konger was not something to be especially proud of. But today everyone realises its importance and suddenly there is this new craze for embracing the  identity as a Hong Konger. I guess people are just unable to face their own pretentiousness. 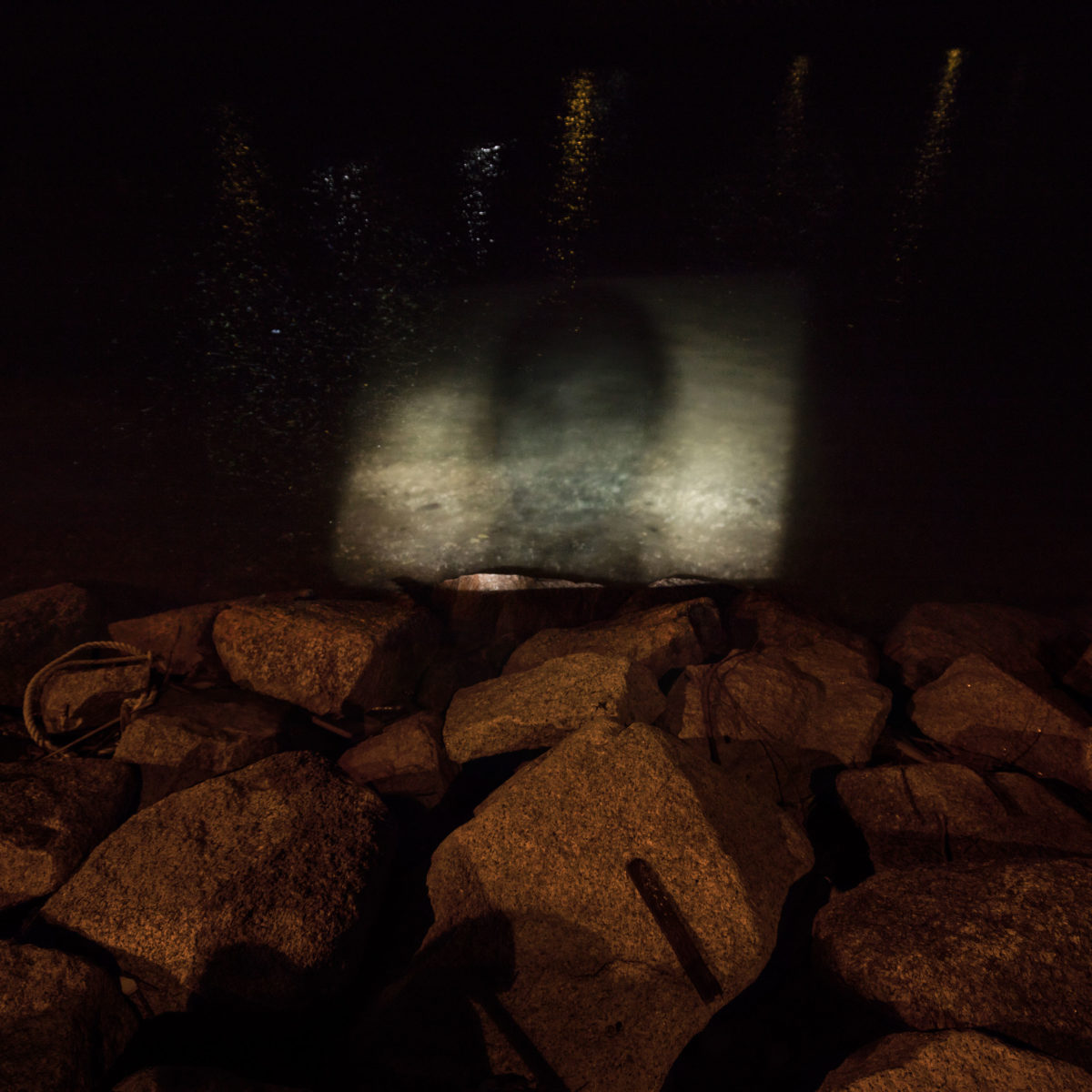 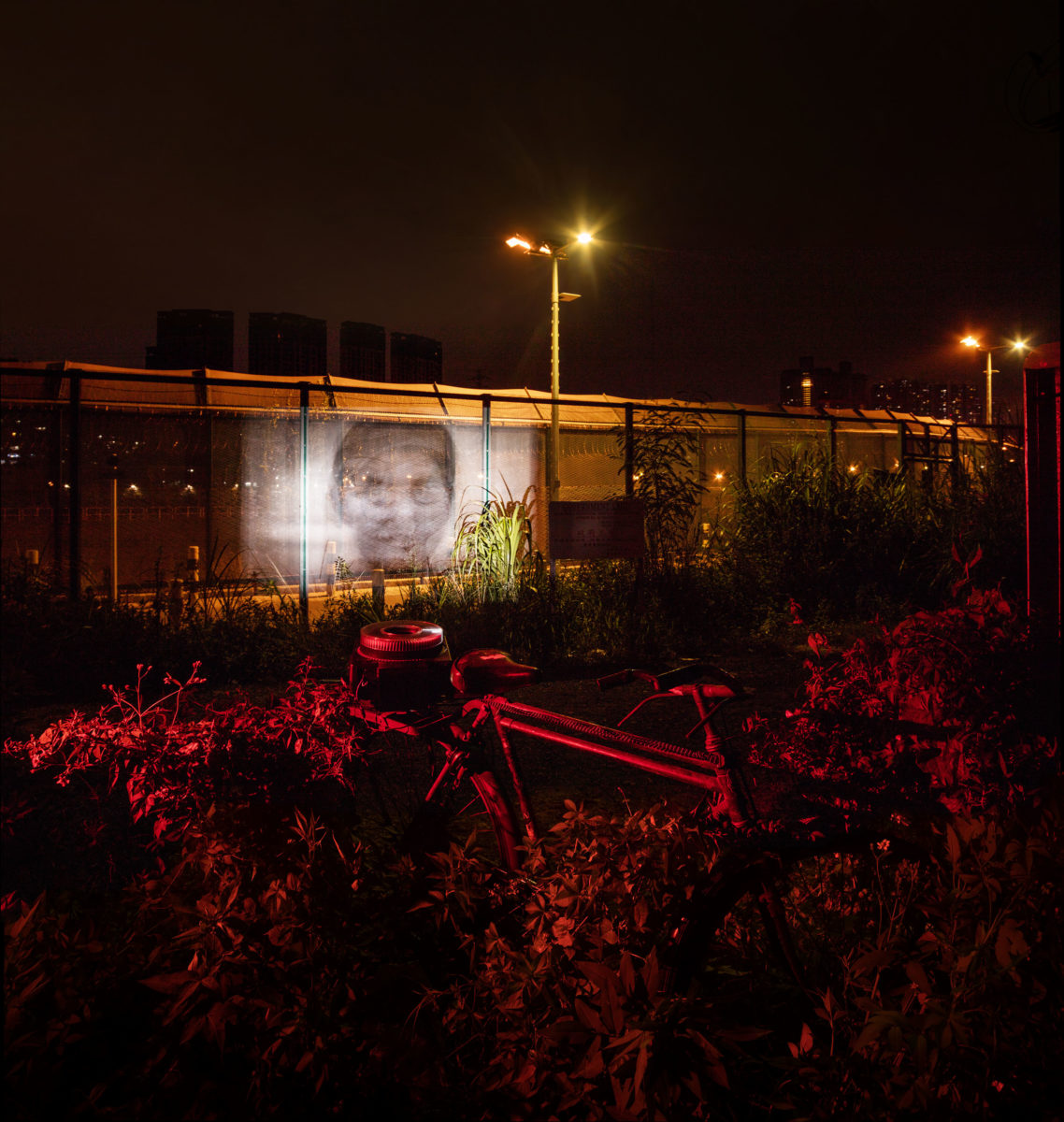 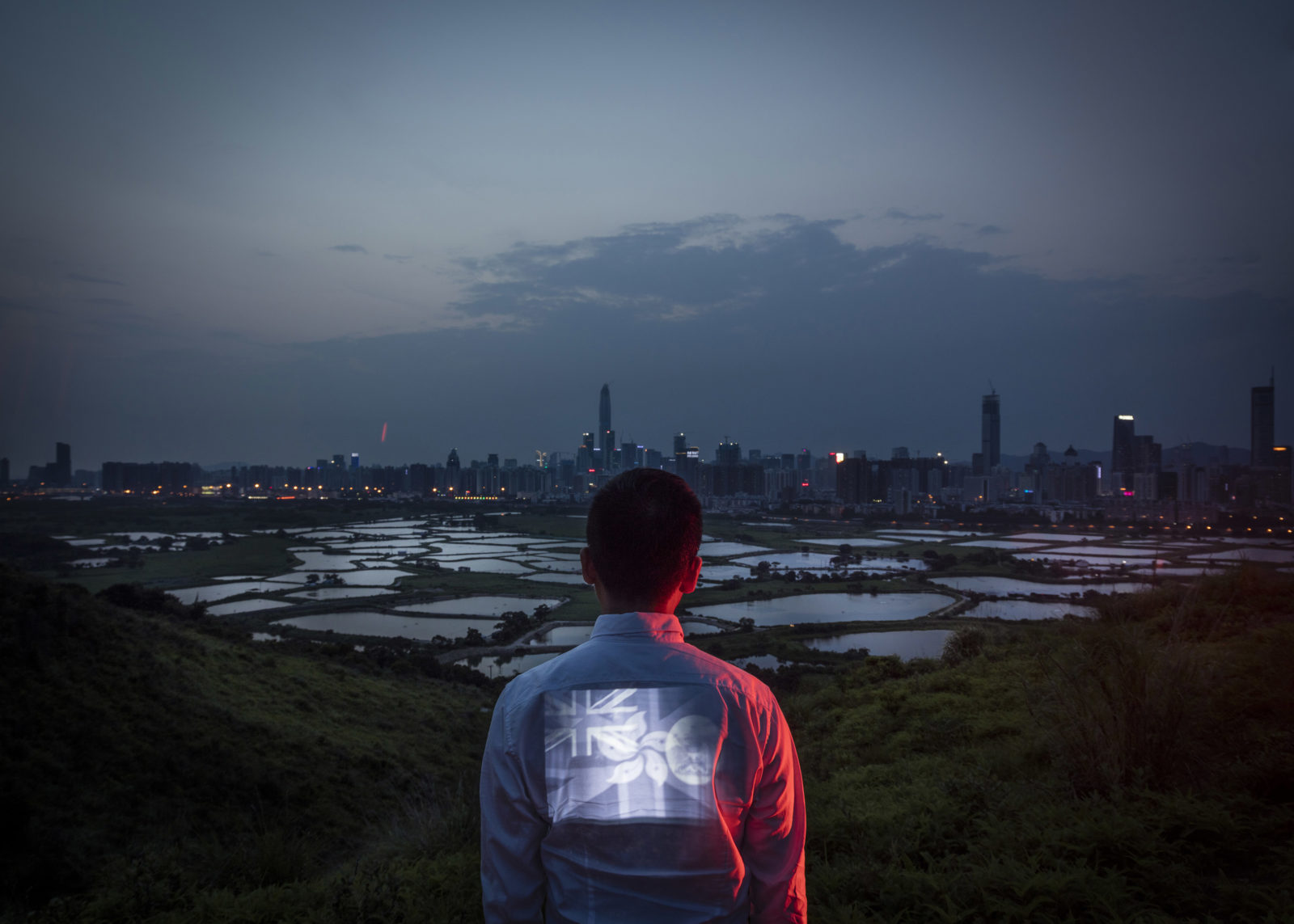 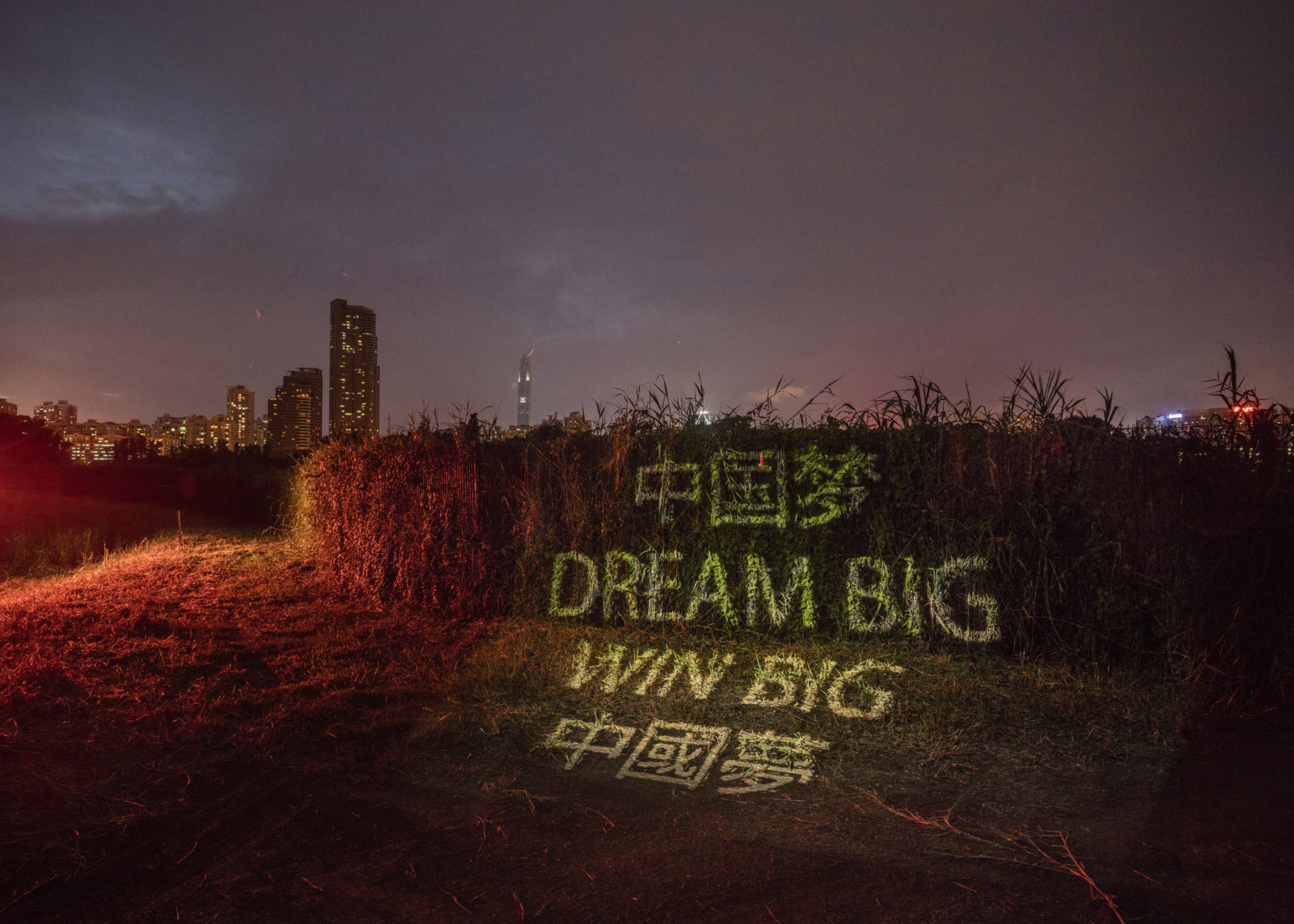 ”All That. Doesn’t”
Digital color print | Archival inkjet print | 2017
Behind every simple-looking image, lots of hard work and effort are involved, which I hope viewers of my work could feel and recognise. One can never tell the full story by judging from one single picture or by looking at one particular point in time. Art stands alone in its own entirety, fullness and spirit.

J: Why did you choose to start the Outfocus Group Workshop at JCCAC? How do you like JCCAC? Please share with us what you have encountered at JCCAC in the past decade.

T: 10 years ago, my friends suggested co-renting a space, and I thought that could be a nice try and that was why I agreed. I was very lucky to have been able to set up a workshop here and to curate various exhibitions like “Poverty. Full-Time”. This is a people-friendly place and I am particularly impressed by the close connection and strong community support between neighbours.

J: Any words of wisdom for our aspiring young photographers?

T: We are in a time when anyone can be a photographer, and everyone thinks he or she is a master of the art. But the lowered threshold does not necessarily make it easier to create a powerful, gripping piece of work. Behind every simple-looking image, lots of hard work and effort are involved, which I hope viewers of my work could feel and recognise.  One can never tell the full story by judging from one single picture or by looking at one particular point in time. Art stands alone in its own entirety, fullness and spirit.