Intimate Portrait
Fleeting Images of a Floating City
Kwok Ho-man, Linus
2020
05
Fine-art photography works and education in Europe have broadened my understanding and horizon in the discipline, and I consequently began to express myself and explore different topics via all kinds of photography techniques and materials.

“Above are ethereal clouds, below are troubled waters, the floating city does not rise, nor sink.” Marvels of a Floating City, the famous work by novelist Xi Xi, depicts the state of Hong Kong before the Handover. Twenty-some years have passed after the Handover, is Hong Kong still a rootless, floating city, hovering in borrowed time and space?

Born in the historic year of 1997 (Handover of Hong Kong), fine-art photographer Kwok Ho-man, Linus (L6-13), explores the material narrative of photography and addresses various social issues after the Handover. Through his works, he captures those fleeting images and preserves “a piece of Hong Kong” that belongs to us. 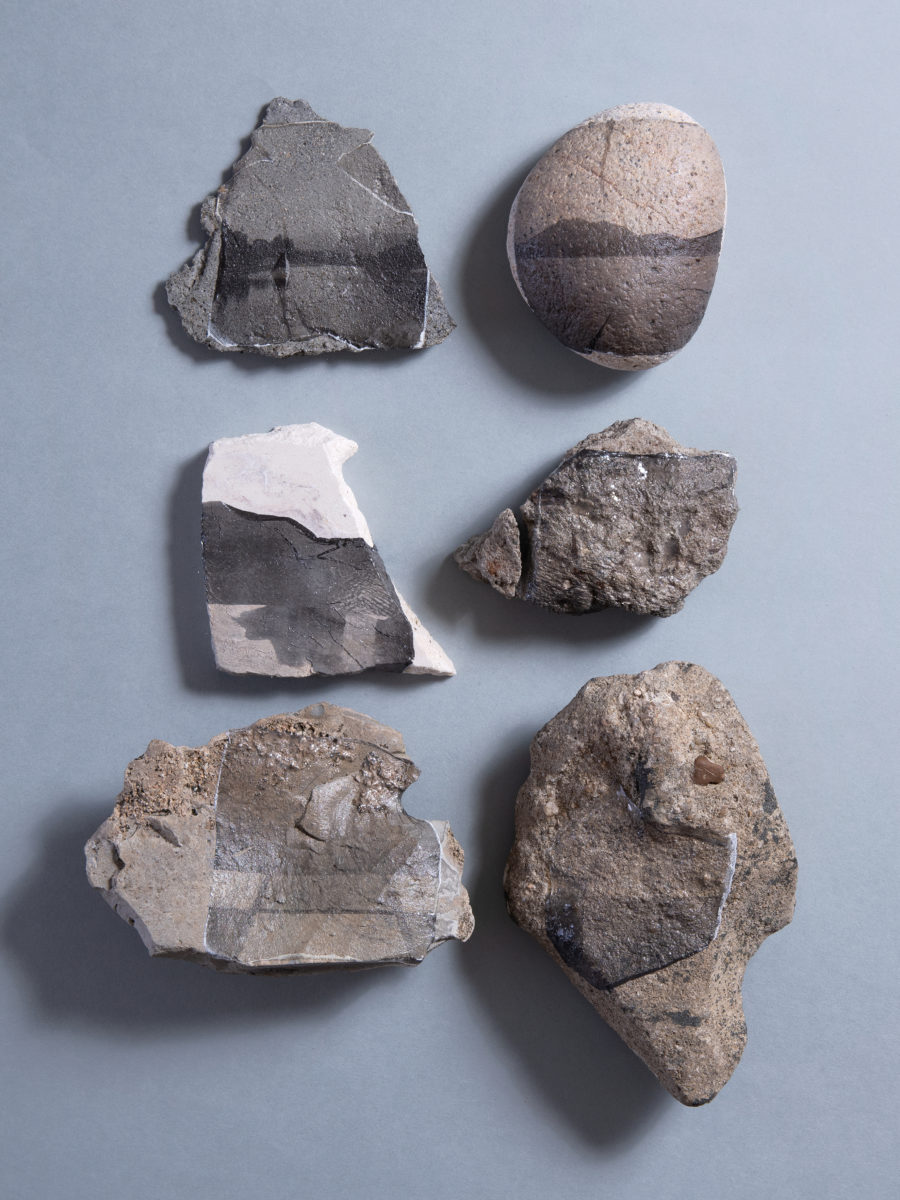 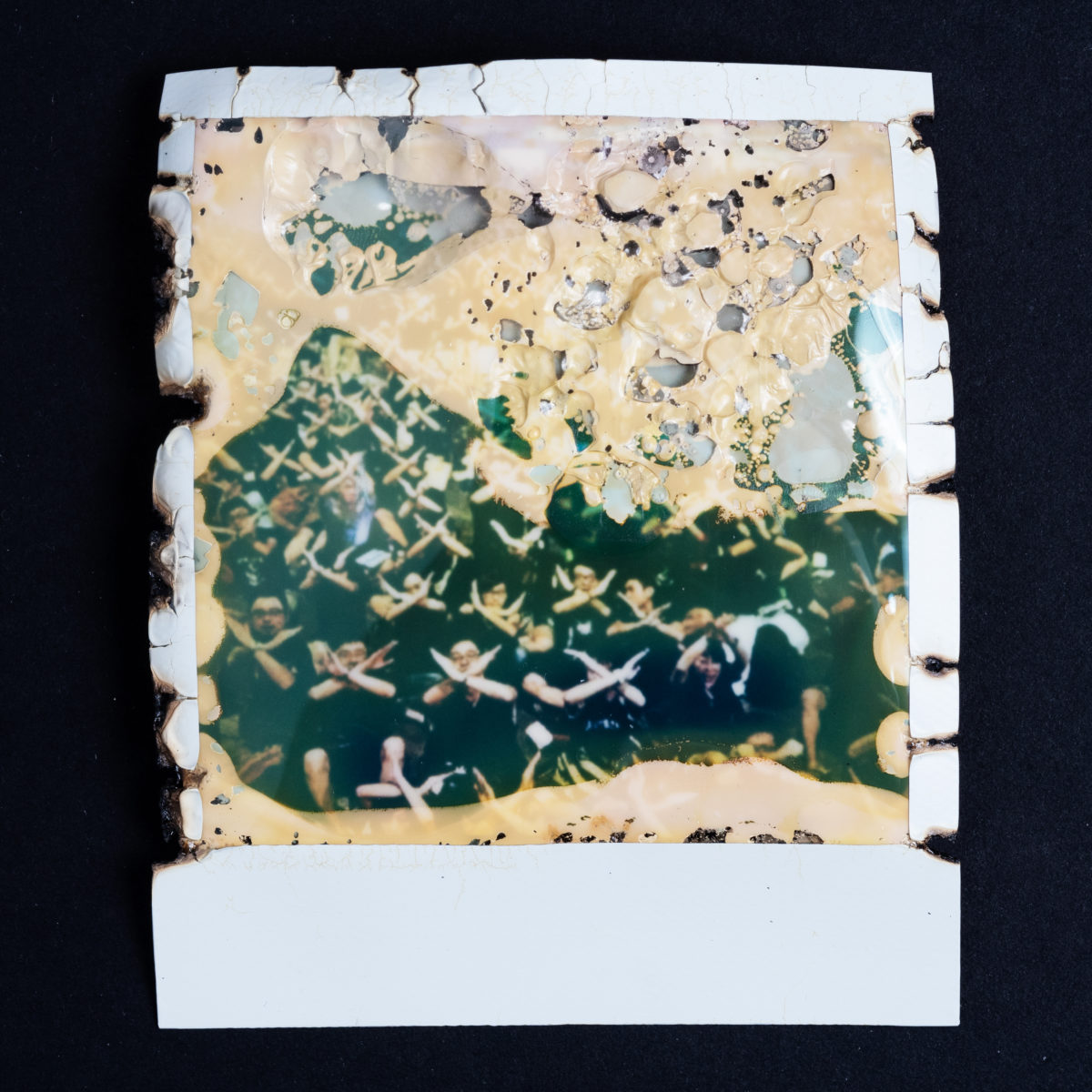 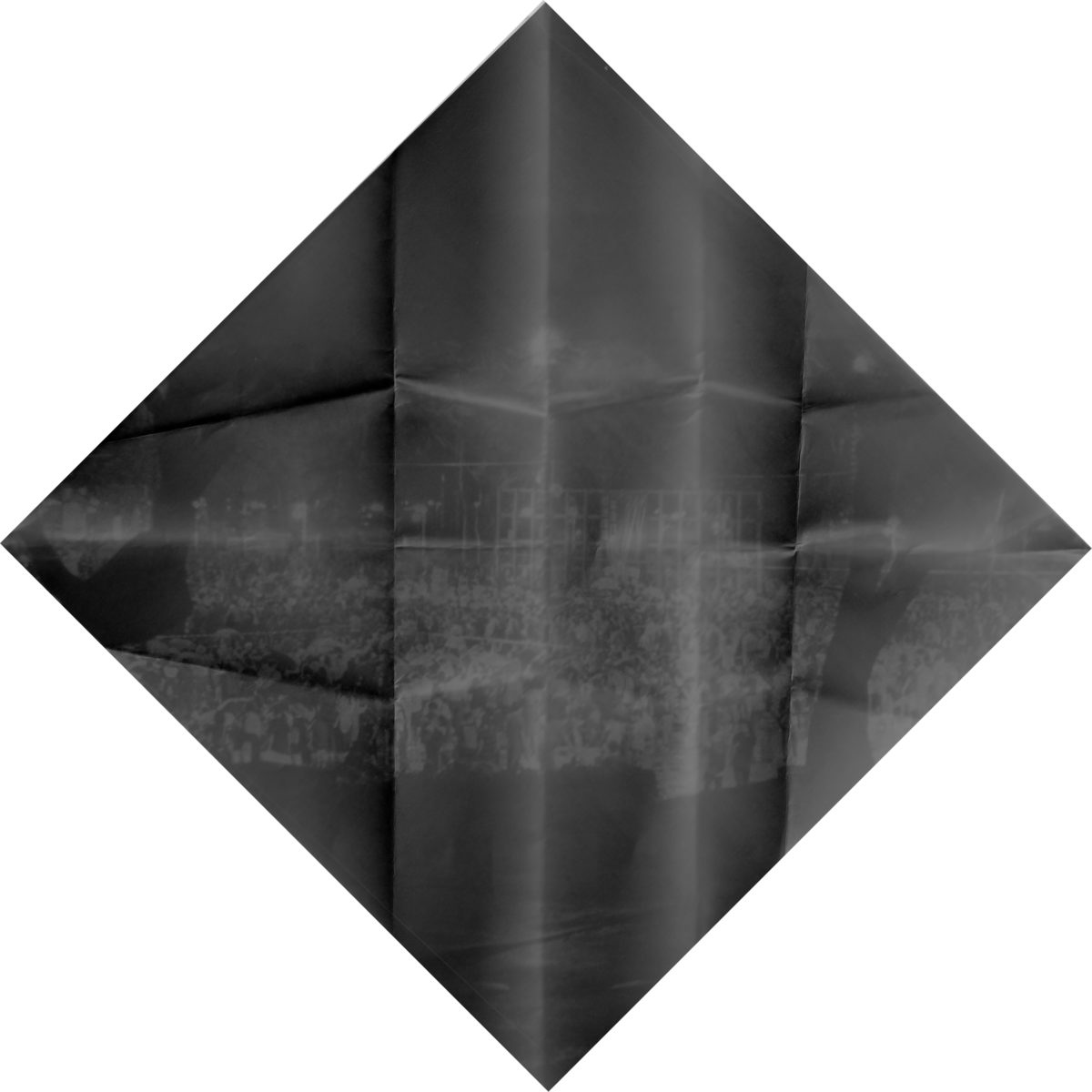 J: How did you embark on the journey of fine-art photography?

K: While studying in the Higher Diploma programme of Film, Television and Photography at Hong Kong Design Institute, I was introduced to advertising and commercial photography. Later, I was fortunate to have received scholarship for an exchange programme in Switzerland. Fine-art photography works and education in Europe have broadened my understanding and horizon in the discipline, and I consequently began to express myself and explore different topics via all kinds of photography techniques and materials.

Back in Hong Kong, I created Absurdity, a scanography series that examines the essential nature of photography, as well as the relationship between flatbed scanners, images and time. Scanner is often considered rigid as it serves solely for duplicating documents and images, yet, I used it to create unique, organic and abstract images. These works are not options in scanning, but also the timelines that record the mindscape in my mind.

K: The novel inspired me to contemplate whether Hong Kong remains a “borrowed place” on the drift, or has put down roots already.

For A Piece of Hong Kong in the Floating City series, I collected some stones from the seaside and riverbank, and photographed the landscapes there with Polaroid, then transferred the image onto the stone respectively, keeping a “double record” of these places. The collection of stones consists of not just rocks, but also broken concretes, this led me to wonder: natural rock or man-made concrete, which one stand for Hong Kong? The process of image transfer is like a transplant, which also associates with colonisation. During a previous exhibition, I placed the stones in water, in an attempt to see if the transferred images will separate from the stones and float on water, but to no avail. New “textures” were “planted” on the stones though.

A Piece of Hong Kong

J: Can you tell us more about “When Ran Out of Tears”, your upcoming solo exhibition at PMQ?

K: The heat of last summer casted a gloom over all the Polaroids that I have taken (as the chemical development of the film was affected by temperature). Among them, one series was taken after the July 21 incident in Yuen Long, a gloomy day for us, as I went fishing with my father at the Lantau Island as a distraction. This prompted me to connect the dots and have a retrospect of history through weather — from the Black Rainstorm on the day of Handover of Hong Kong to the abnormal heat during social movement last year. Both occurred in summer but the big contrast in weather had me question that “tears” have run out years ago, leaving behind this suffocating “heat wave” now.

Overdeveloped Polaroids due to
Summer Heat

J: What topics/subjects do What Remains series wish to explore?

K: It centres around the theme “reheat” (stirring up old news) and censorship. I used Polaroid to retake pictures of historical and social events, including the Handover, the anti-national education curriculum protest, as well as news photos of traffic accidents during important dates, such as the demolition of the Queen’s Pier and the first tear gas fired during the Umbrella Movement (in response to the remark made by Chen Zuoer, China’s representative of Sino-British Joint Liaison Group, before the Handover on welfarism in Hong Kong: “A speeding Formula One racing car, which is going to crash and kill all six million people”).

Besides, I have also taken in some music video scenes and film stills that are censored in Mainland China, such as Great Wall by the local band Beyond, Dance Dance Dance by singer Anthony Wong, movies Ten Years and From Beijing with Love. These Polaroid photographs I have taken are “reheated” in the microwave as they develop, resulting in partly erased or damaged images, akin to censorship. The final question is “what remains” in our memories?

J: How did the idea of “microwave” Polaroid come up? Are the finished works within your expectations or with surprises?

K: Polaroid may appear scientific but it is anything but. What makes it interesting is its uncertainty, being traditional while “instant” in nature. I like experimenting with different materials, therefore, I placed the Polaroids in microwave to test the possibilities and effects. There has been a fair share of failures, coincidences and pleasant surprises. Take the Local Egg of the movie Ten Years as an example, I tried numerous times before successfully preserving the whole egg. Meanwhile, the imagery of sky and land appears in 2012-07-29 after the microwave process, and the crowd of the Anti-national education curriculum protest seems to form a mountain. Surprisingly and ironically, in the subtitles of Great Wall, the word “kingdom” remains but “truth” fades away. 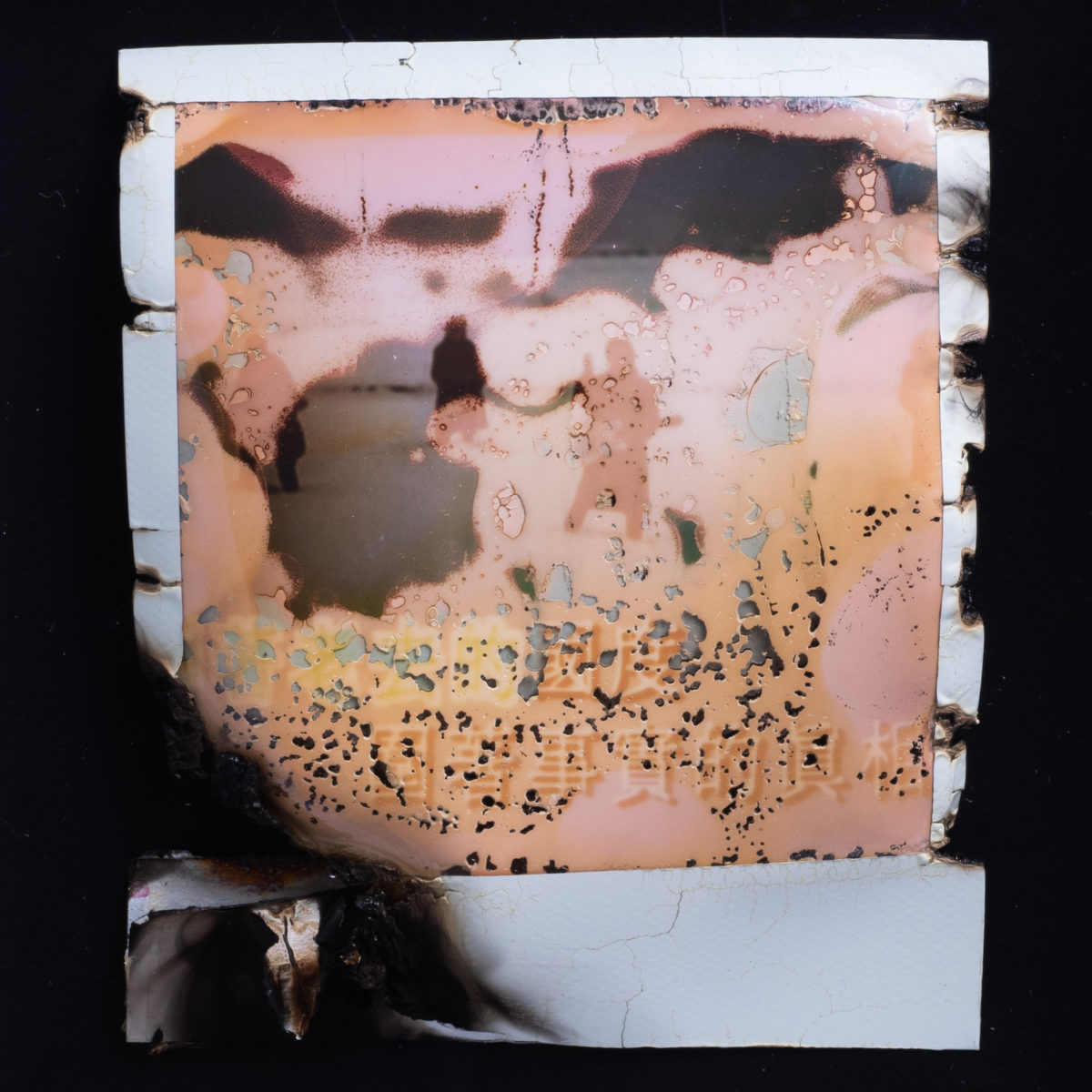 J: Why present the images of recent social movements in the form of origami? The significance of the Unfold series to you…

K: It is a tribute to the recent social movements, and it is inspired by one of its events in which protestors gathered to fold paper cranes. When you “unfold’ an origami, the creases that left behind are permanent, this made me realise actions that seemingly insignificant could still leave a scar. The images in the series are largely related to the origami patterns. For example, the origami pattern for 2019-06-04 is pigeon, which corresponds to the June Fourth vigil and the quest for freedom. 2019-07-01 folds into an airplane, which represents protestors flying paper planes into the legislative council on that day. And I am most satisfied with 2019-06-16, as the image becomes kind of three-dimensional with the creases of a paper crane. 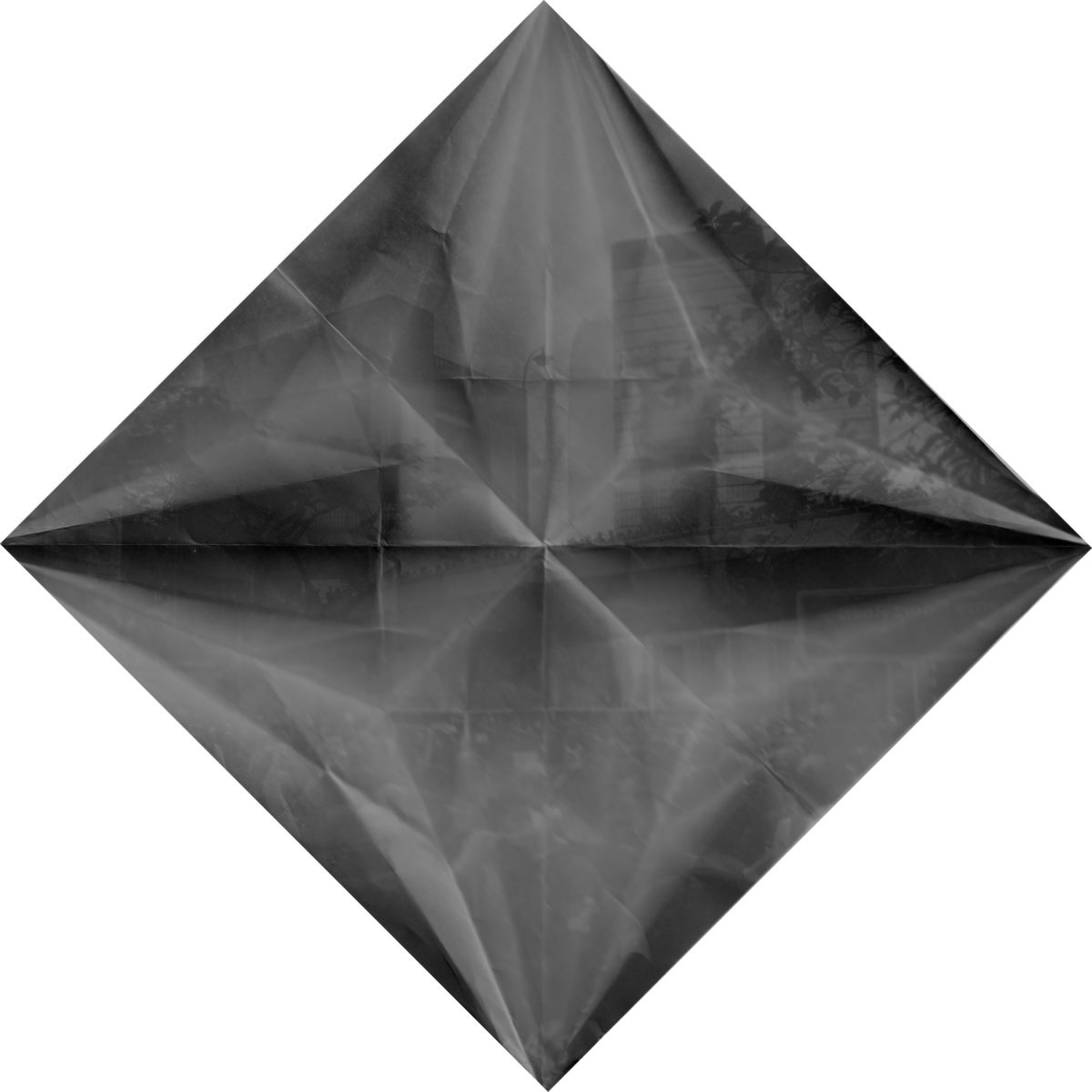 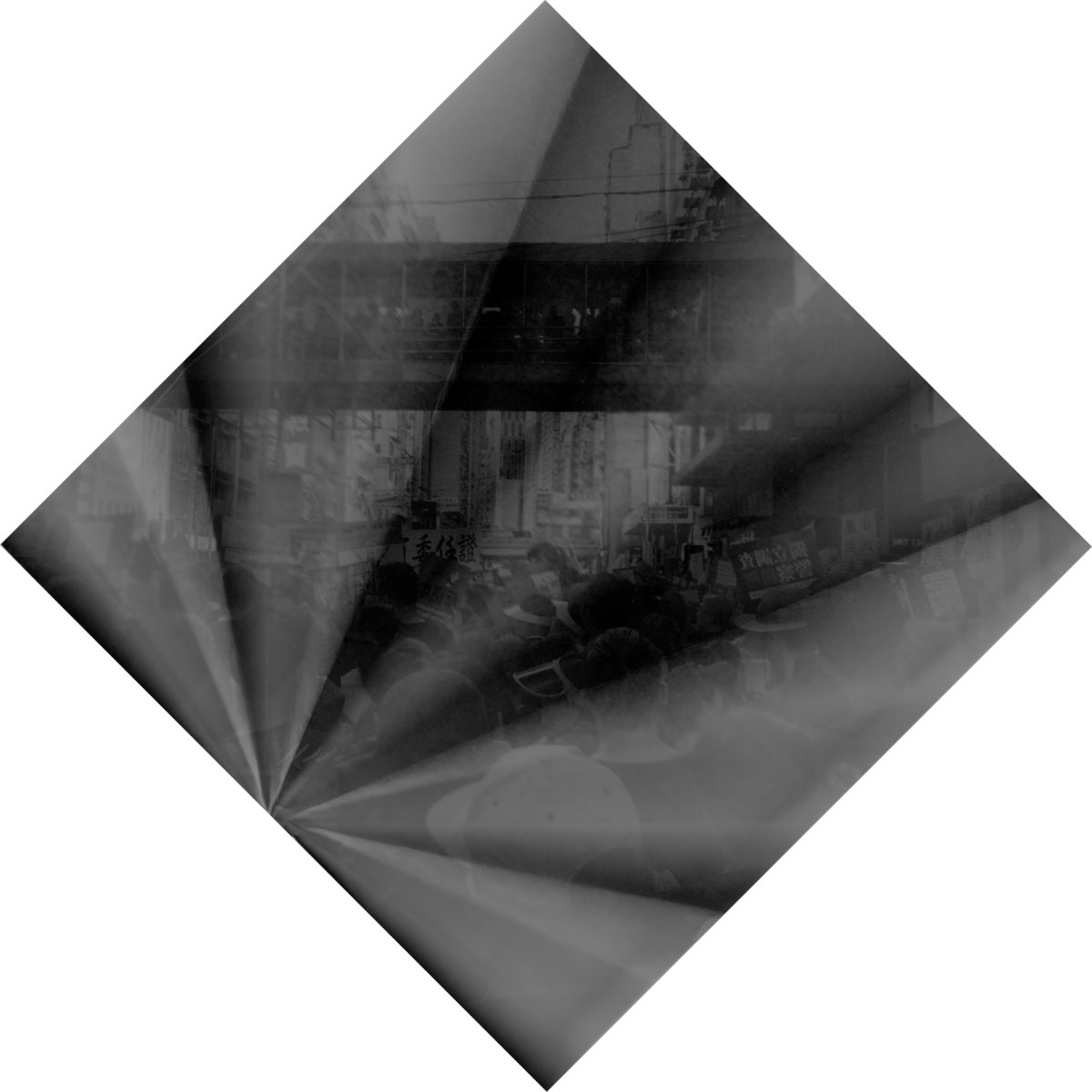 2019-07-01
Folded print | 2019
When you “unfold’ an origami, the creases that left behind are permanent, this made me realise actions that seemingly insignificant could still leave a scar.

J: What is your view on Hong Kong and the identity of Hong Kongers after the Handover? Was there any historical or social event that had a profound impact on you?

K: I am proud to be a Hong Konger. It was close to June Fourth when I was creating What Remains, and it was my pleasure to be invited to participate in “The Wall 2019” exhibition, which focuses on the May Fourth Movement and June Fourth incident. Even though the June Fourth incident might not be as influential to me as the recent social movement in Hong Kong, I do believe that it is necessary to learn from history.