Intimate Portrait
A Man
of
Character
Kong Hoi-kan, Thomas
2020
07
"To me, Chinese seal is my storytelling platform and diary."

Playful and articulate with words, Chinese seal artist Kong Hoi-kan, Thomas (L5-17) is zealous in the study of etymology, aesthetics and symmetry. Through exploring the art of language and seal-making, he skilfully counteracts verbal abuse. Seal-making is a source of personal satisfaction for him and not a bad way to earn a few crumbs.

Kong received his BA in Visual Arts at Hong Kong Baptist University (HKBU) and MA in Cultural Management at The Chinese University of Hong Kong. Taking Han culture as blueprint, he injects the vigour of contemporary values into the traditional art of Chinese seal.

How did you become a Chinese seal artist

Before engaging in seal carving full-time, I have taken up many jobs – clerk, public relations officer, arts administrator, radio programme assistant and so on. Seal carving was initially only a past time with the odd consignment a welcome source of extra income. However, as time went by, I found no sense of accomplishment whatsoever in my day job and often questioned my own value. I started devoting more time to practising Chinese seal carving, and the sense of achievement I obtain from it continues to be my driving force.

Unlike in other mediums such as metalwork, the tools used are comparatively more handy and the process simpler, which suit my short attention span and carefree lifestyle. Also, the obsessive-compulsiveness in my personality becomes a strength as Chinese seal carving values symmetry and precision. 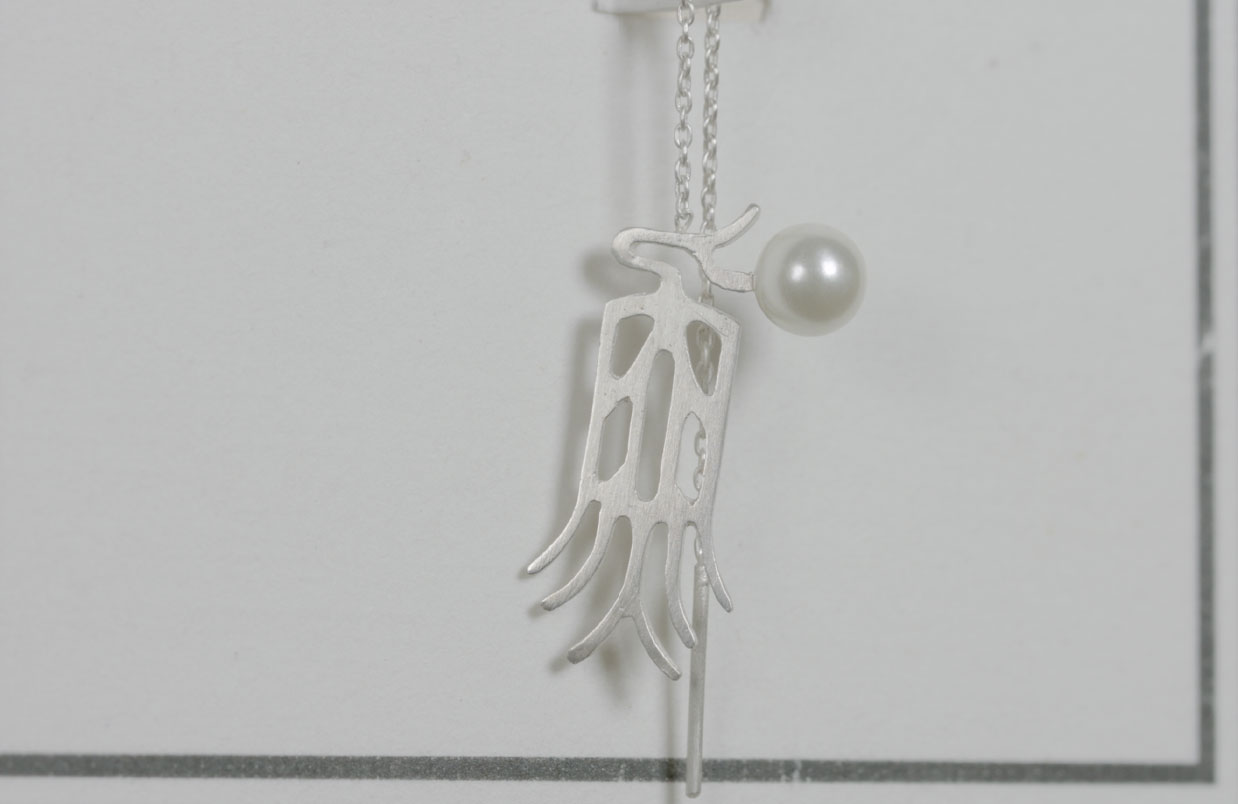 At the corner
Community art project
2018 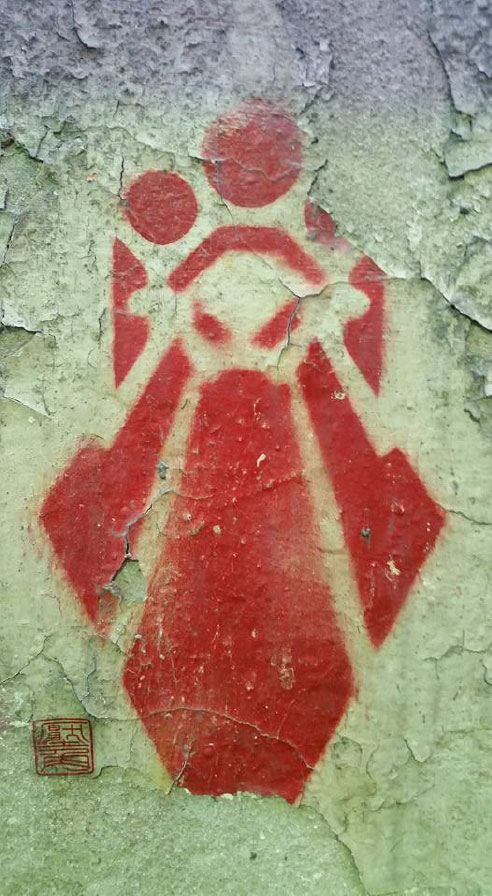 The significance of Chinese seal to you…

To me, Chinese seal is my storytelling platform and diary. I once made a seal with the words “tick-tock” for a friend of mine who is always late. Whenever I have to wait for her, I would stamp the “tick-tock” seal on my notebook, so that once I accumulate 100 of them I can redeem a treat of her buying dinner for me.

I also use my work to manage my poor relationship with my verbally abusive sister. For instance, once she snapped at me to make me shut up, so I let off steam by making a seal of an ancient Chinese character that meant “to keep quiet” and stamped it repeatedly on a piece of paper like casting a hypnotic spell.

I also make seals for happier reasons too, often creating playful gifts to friends with tongue in cheek puns and wordplay. 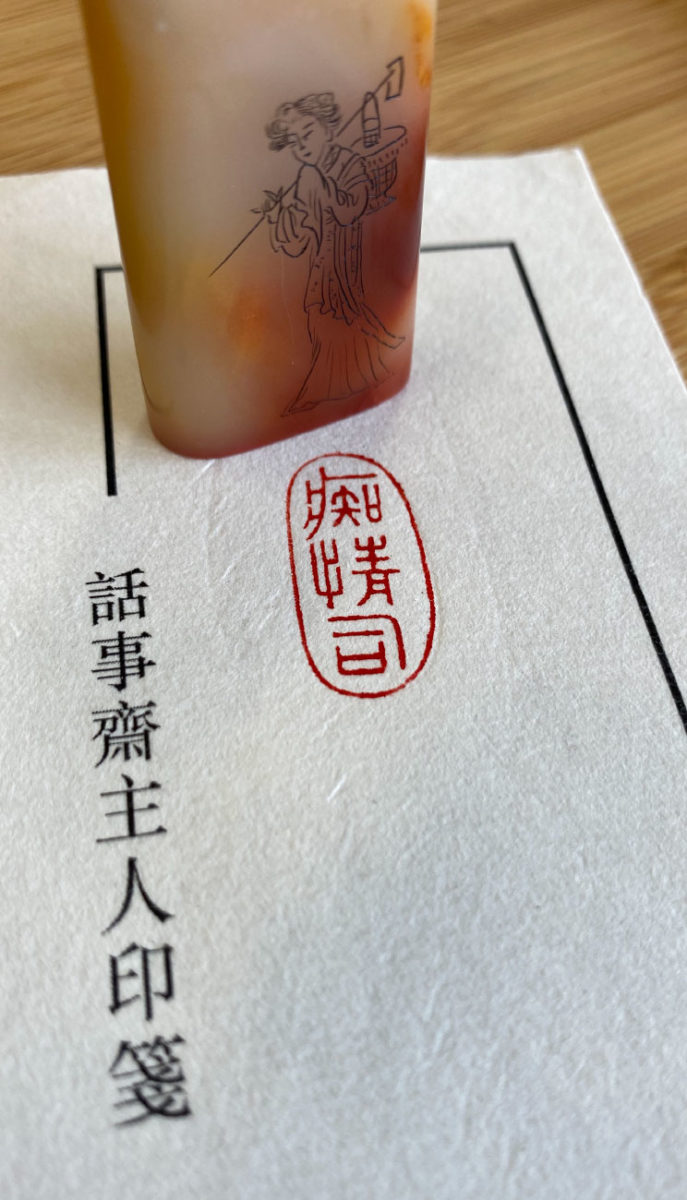 What is so special and fun about Chinese seal?

Similar to font and logo design, Chinese seal sees numerous varieties. The interesting factor is its emphasis on overall image instead of individual characters. Like hieroglyphs, it shows words as connotative images, creating tension and ambience that are expressed beyond mere words. Take this six-sided seal of mine as an example, the words on the seal are synonyms of “cleaniness”, and they form a holy cross on paper. It alludes to the irony in the pursuit of spiritual purity that often entails the hands getting dirty in the process.

Making a Chinese seal is in fact creating a creative tool for creation. Subsequently, seal carving and seal stamping are individual forms of creations on their own.

How do your works differ from traditional Chinese seals?

My works are more experimental and playful when compared to traditional Chinese seals. For “Pearl and Beyond”, a recent exhibition of studio jewellery presented by the Academy of Visual Arts of HKBU, I created a series of Chinese seal earrings and named it Anastasia. Inspired by the Chinese opera Zhuiyu (Chasing the Fish), the earrings feature the seal script Chinese character of “fish”, adorned with local pearls and foreign plastic beads – playing on the Chinese proverb about passing off fake things as real.

I also turned corner seals into transparent stickers, which I have used to hijack random graffiti works on the street, playing with the tradition that corner seal serves as a signature in Chinese paintings (akin to a tag in graffiti).

What is the concept behind the community arts project you collaborated with The Warehouse Teenage Club?

Through the project, we want to help young people release negative energy while acknowledging the impact of verbal abuse. I placed collection boxes at various organisations to collect notes from people, in the first phase asking them to write down the most unpleasant words they have heard, and in the second phase requesting them to share the most encouraging ones. At the exhibition, the grievances expressed in the notes of unpleasant words were presented in the style of a mock Chinese séance. The contributors were then invited to pick one of the positive notes to take away with them, as a symbolic gesture of embracing emotional change and enlightenment.

The idea of séance for the aggrieved probably has its roots in the fact that my family runs a business making and selling paper effigies. My childhood idol is Lam Ching-ying, the actor who was famous for playing a Taoist priest in Hong Kong zombie films. After school I used to help out making paper effigies at the shop – folding paper clothes and paper money – and that was how I learnt to eke out a living using my own hands.

Among the notes collected in the project, the most unpleasant one was…

Could you give an anecdote?

I regretted entering a shotgun marriage and giving birth to you”. Verbal and domestic violence is a vicious cycle that I hope to stop.

I heard the story of a “throuple” in a polyamorous relationship, and so I tweaked the “double happiness” character (a Chinese symbol of marriage) into a character illustrating “triple happiness” for my work.

Could you tell us more about “Master of Obsession”, your upcoming solo exhibition at PMQ?

The theme of the exhibition was inspired by the numerous couples asking me to engrave their names on stones as a “seal” of love. I was told the wildest and strangest love stories, and came across different visions of love from all walks of life.

While shopping, I happened upon a piece of jade engraved with the image of “Lin Daiyu burying fallen flowers” from the legendary Chinese novel Dream of the Red Chamber. It was kitsch but I bought it. With a sudden fit of “eighth-grader syndrome”*, I transformed it into a seal for myself, with the name (Master of Obsession) of a mythical figure from the same novel. A seal is a representation of identity, and I become the “Master of Obsession”.

I am indeed the lovelorn and stubborn type. As a student I would obsessively connect the diagonal corners of graph paper with a ruler. Insect in Book was also created in an obsessive frame of mind – I made ten seals of moth images, and used them to stamp on each and every Chinese character containing “fire” in the text as I read The Temple of the Golden Pavilion by Yukio Mishima, just like real moths are helplessly drawn to the flame in self-destruction.

In addition to seals, the exhibition will also include classic verses from Chinese operas that serve to tell stories about the seals.

To me, Chinese seal is my storytelling platform and diary.
Q9. J

How should one appreciate Chinese seal? What is your view on traditional Chinese culture?

Chinese seal does not only focus on the precision and fineness of the craft, it also looks at the ingenuity of the composition, and whether the characteristics of the Chinese characters are highlighted. Among the masters of Chinese seal art, my favourite is Chen Julai. The lines in his works are well-balanced while the characters are slender and elegant. The curvature and symmetry are simply perfect. I also appreciate his boldness in making 360-degree font by free-hand.

There are also many masters in Hong Kong, such as Dr Daniel Lau at HKBU and Tang Cheong-shing who is a member of the Xiling Seal Art Society.

I used to study drama while in HKBU and had worked at a Chinese opera company. It turns out that many foreigners are more interested in Dream of the Red Chamber than works by Shakespeare. Therefore, I think leveraging our own advantages by learning about the traditional Chinese culture and making good use of it in our artistic creations are in some ways a better strategy than simply pursuing Western culture.

*Chūnibyō, a Japanese colloquial term typically used to describe early teens who have delusions of grandeur, often live in their own world, and consider themselves possessed with super power.