Intimate Portrait
Freedom-Hi
Tse Man-yan, Jasmine
2019
08
Many artists are partial to the alternative and disdain all things mainstream – but that shouldn’t be the case. My philosophy is to always keep an open mind.

The recent social movement in Hong Kong brought about much noise, sparking an outburst of creativity such as the coining of the slang, “Freedom-Hi”. What does freedom mean to you? “Freedom is a luxury,” said Jasmine Tse (L7-03), the well-liked illustrator who works under the pseudonym, Tse Sai Pei (a Canto-slang that means exhaustion).

Take a browse at Tse’s website, the first thing that comes into sight is the phrase “born free”, accompanied by an almost grotesque self-portrait. As the conversation flows, it is hard to miss her cult(ural) and communicative personality – beneath that eccentric, vulgar and hilarious façade, lies ,a sensitive soul with intellectual faculty and astute social antennae.

Through Tse’s works, one can almost see that freedom is the ability to express one’s true self and to pursue one’s heart’s desire.

J: What inspired you to create your comic character, Tse Sai Pei?

T: The phrase reflected my state of mind back in 2012 when I was at my first full-time job fresh out of university. Sick and tired of the mundane office work, I needed a creative outlet. Though now I am no longer burnt out and my illustration style has evolved since, part of those characteristics lived on and there is still a strong sense of humour and playfulness in my work.

Tse Sai Pei, publication
A Rendezvous with
Myself Along the River Thames

J: How is Tse Sai Pei like? How do you view Cantonese slangs such as mah lut (masculine bad habits, stemmed from the French word, malade), hea (procrastination) and duk (literally “toxic” and generally used to describe unattractive nerds)?

T: I am sensitive and easily distracted. I could never focus at school but was constantly drawn to things in my surrounding. While at restaurants, for example, I am always eavesdroping on my neighbouring patrons – for inspiration for my illustrative works, of course!

My daily observation informs me that people are phony. They would call something cute even though they are ugly.  However, as much as terms like ma lut and duk seem like mockery, there is a sense of endearment embedded there – they are only used with people we are familiar with, who are “in the circle”, so to speak‘.

J: Why did you choose to pursue your masters in the UK?

T: At that time, I felt like I was trapped in Hong Kong in an artistic bottleneck, with little room to enhance my creation. At the same time, I am up to try new things and studying in the UK has always been my dream.

You would not realise how small you are until you leave home and see the world. My coursemates came from all over the world and enlightened me so much – I would say even more than the course itself. 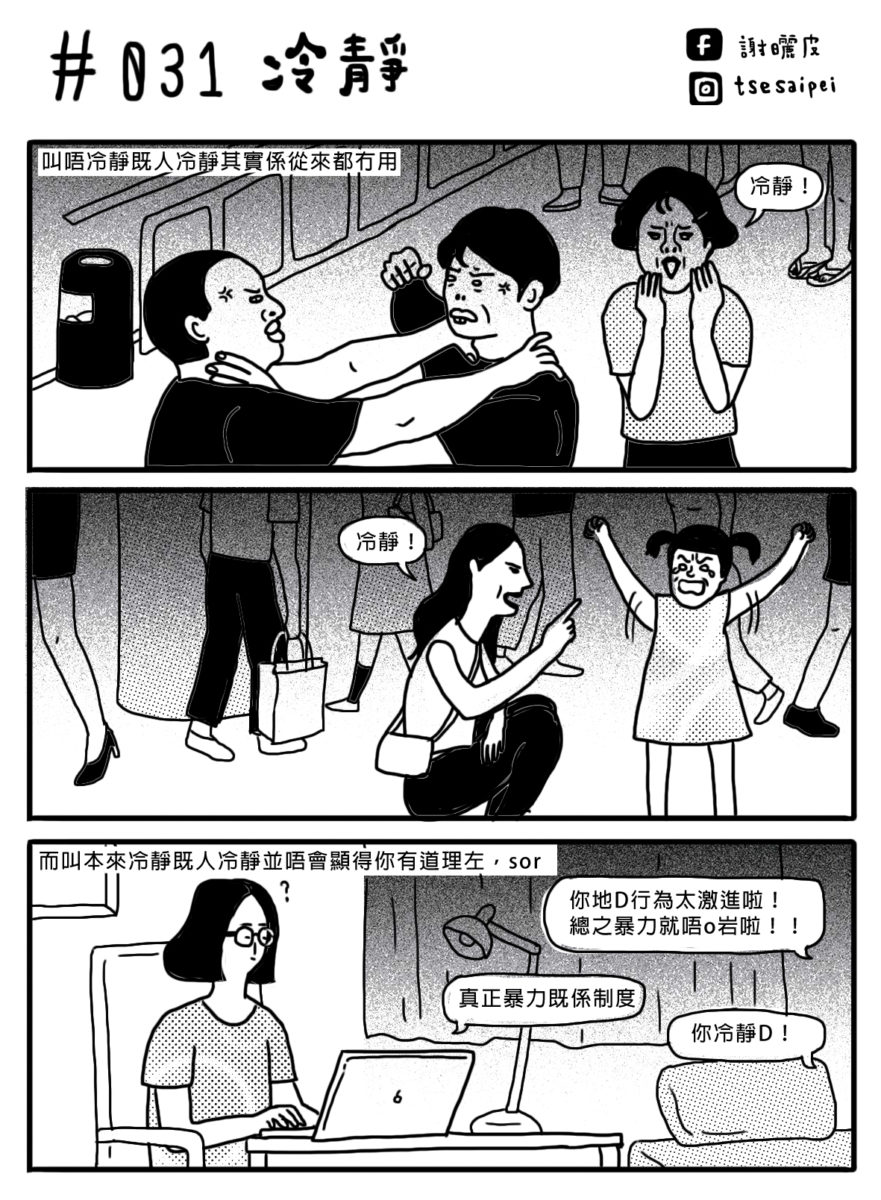 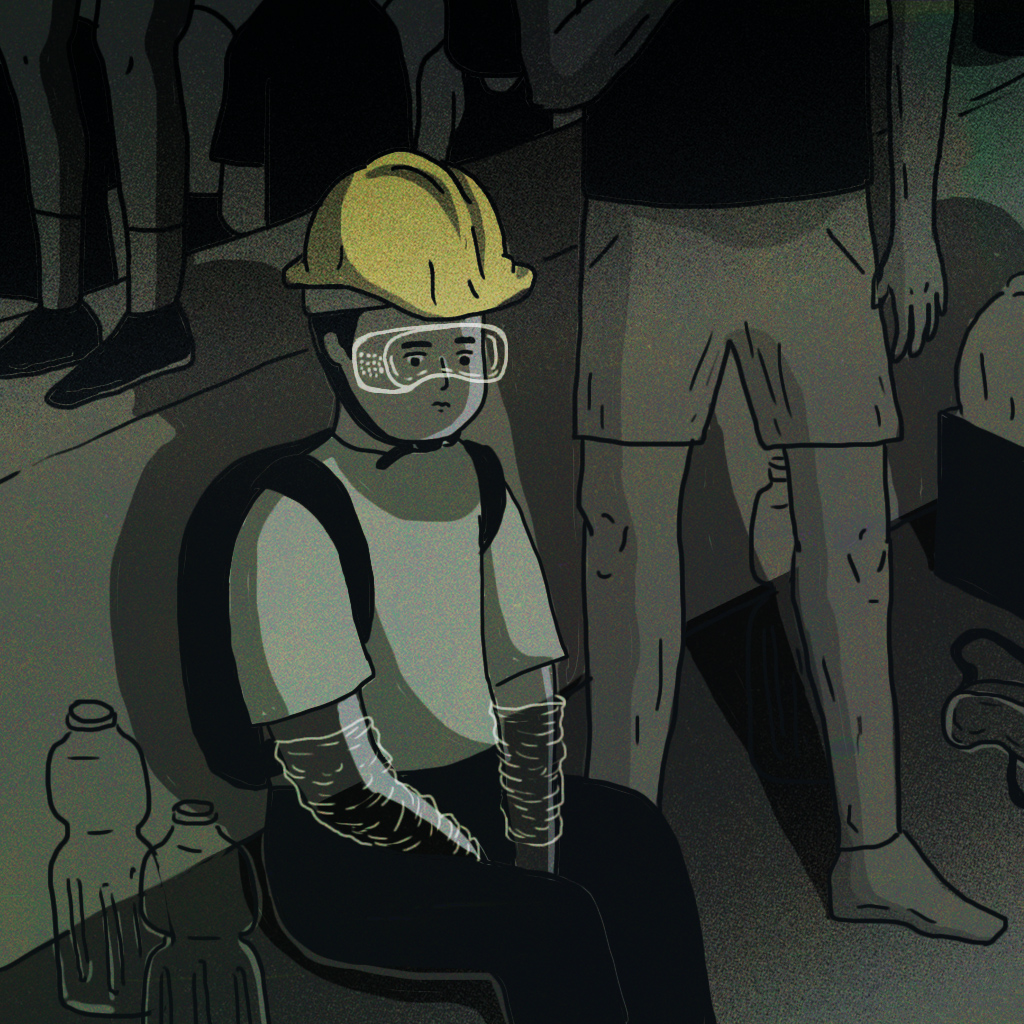 J: Returning to Hong Kong, how differently do you perceive your hometown?

T: I became politically conscious in 2014, and it was when my work started to touch on political themes and current social issues. I came back from the UK with a fresh perspective on people and things. My political stance has drawn closer to the pan-democracy camp (the so-called “leftards”with their “peaceful, rational and non-violent” approach from the localist groups) in recent years. Many people nowadays seem to struggle seeing a bright future in Hong Kong. But my hope for this place has been reignited when I saw the level of maturity demonstrated by ouryoung generation, as well as how people stand in solidarityin recent rallies.

Tse Sai Pei, illustration The Dream Man
is as Responsive
as a Taobao Seller

J: The Slash Generation is the latest buzzword, everybody seems to assume multiple identities. Between an illustrator, a teacher and a KOL (key opinion leader), which is your favourite role?

T: My favourite role would still be illustrator. I used to think that being an illustrator meant just keeping my feet on the ground, staying behind the scenes, and to single-mindedly dedicate myself to creative work and pursue nothing else. But now, I think it more interesting for creators to open up, experiment different mediums and interact with audiences via various platforms.

J: How do you strike a creative balance between popular taste and your artistic integrity?

T: For works intended to be published online, public interest takes precedence as far as the subject matter is concerned, adding the Tse Sai Pei treatment of light-hearted humour and the creator’s perspective on the subjects, in order to strike a chord with my readers. I used to consider illustration merely as a means to derive income. But, in time, I realised that my works can also be an emotional outlet, like my recent animated music video Hotel Harbour Grand which was created at a low point of my life after a breakup to channel the sadness. The video happened to catch the eye of local singer Justin Lo’s creative team, who later invited me to work on an animation for his concert.

In addition to my comic strips for online media, I also do illustration work for an eclectic range of commercials. Aside from cosmetics to skin care products, I seem to be favoured by clients selling products for curing unmentionable ailments, anything from acne spot-treatment cream to body odour spray. I even hold a monopoly over the market for athlete’s foot treatments (albeit only two brands)! I guess it is because Tse Sai Pei has a mass appeal and within the diversity of my creation lies the uncanny ability extract humour from the grotesque. 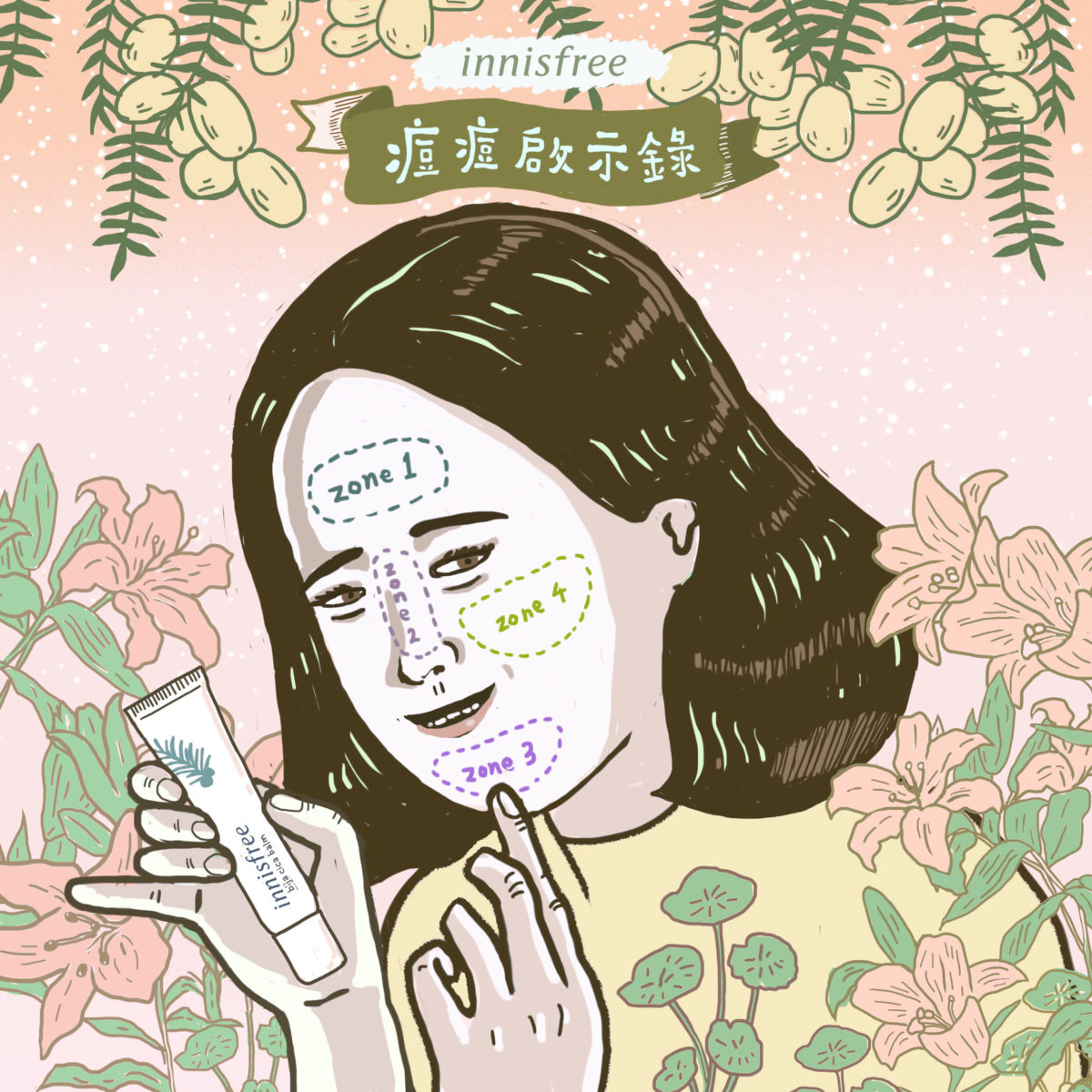 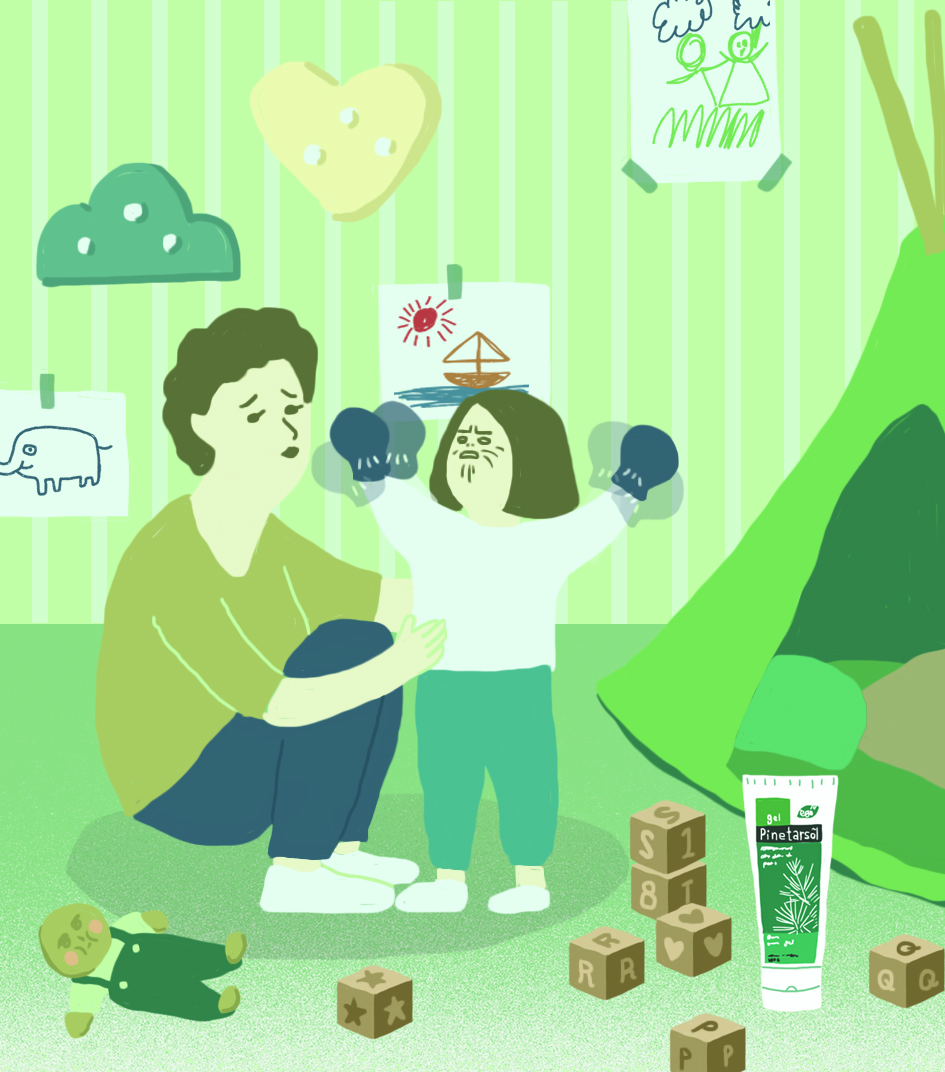 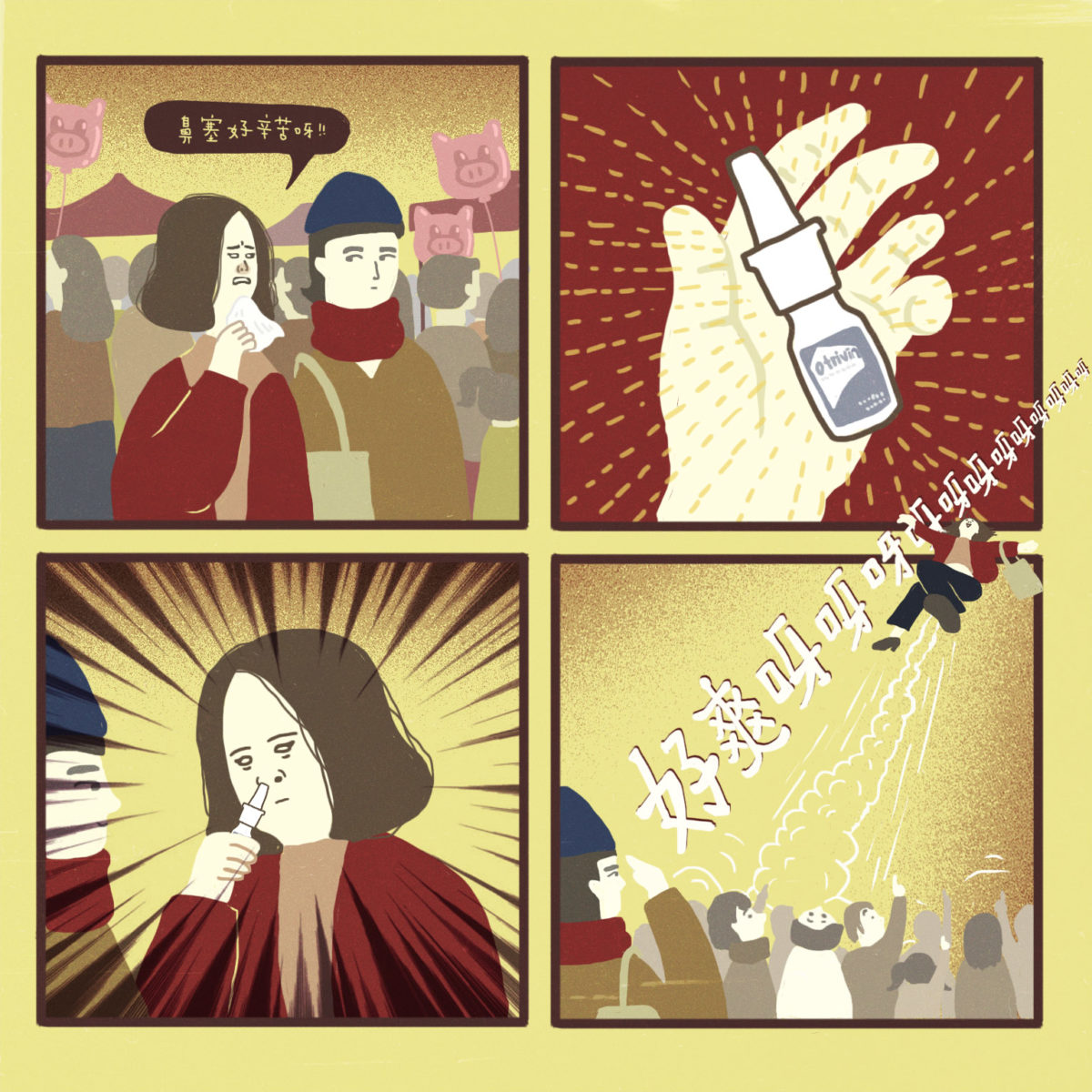 J: Are independence and freedom what modern women pursue? What does trend mean to you?

T: Hong Kong women still embrace the traditional notion of getting married and raising a family. They even set a deadline for achieving it: getting married before 30 and striving for a successful career all the while. Failing to achieve either of these means failure in life. What they do not know is that life really begins at 30. Just look at Ellen DeGeneres. She was in her 40s when she had her first talk show. I think we should give more recognition to both women being the bosses of their lives and the perks of being independent and free.

Nostalgia is an everlasting trend, from fashion to the arts. The present-day fashion trends are an extension of 1990s and millennium styles, and classic music never gets old. But creators should not just indulge in the past, they must also move forward to learn new things. Many artists are partial to the alternative and disdain all things mainstream – but that shouldn’t be the case. My philosophy is to always keep an open mind.

I would like to start a web radio station and host phone-in programmes. I fancy playing an agony aunt giving advice on relationship and life problems

T: I would like to start a web radio station and host phone-in programmes. I fancy playing an agony aunt giving advice on relationship and life problems. Anything to mend the soul. I have always been a sucker for radio programmes and my idol is Henry Chan (aka Wan Hoi). There was this radio programme Talk of the Town and they had a segment called “All Pampering and Zero Scolding (transliteration)”. I am thinking of calling mine “All Scolding and Zero Pampering”. People these days seem to prefer sticks over carrots (chuckles). And as part of self-improvement, I am planning to enrol in a Chinese medicine course at Hong Kong Baptist University to learn the wisdom of this traditional practice for health and wellness.

J: An increasing number of young people are joining the illustration sector. What are your views on the future development of this industry?

T: A student once asked me how to become an illustrator. My answer was that you can be one as soon as you start a Facebook page! Compared to the olden days when comic artists had to undergo the long, painstaking progress of apprenticeship, this really is the best of times for aspiring illustrators. However, with the bar lowered, the competition becomes fiercer, so one needs to find its niche to win readers’ attention. Some people believe that quirky subject matters catch people’s eyes, but I find going back to basics and effort placed in composition are equally important. 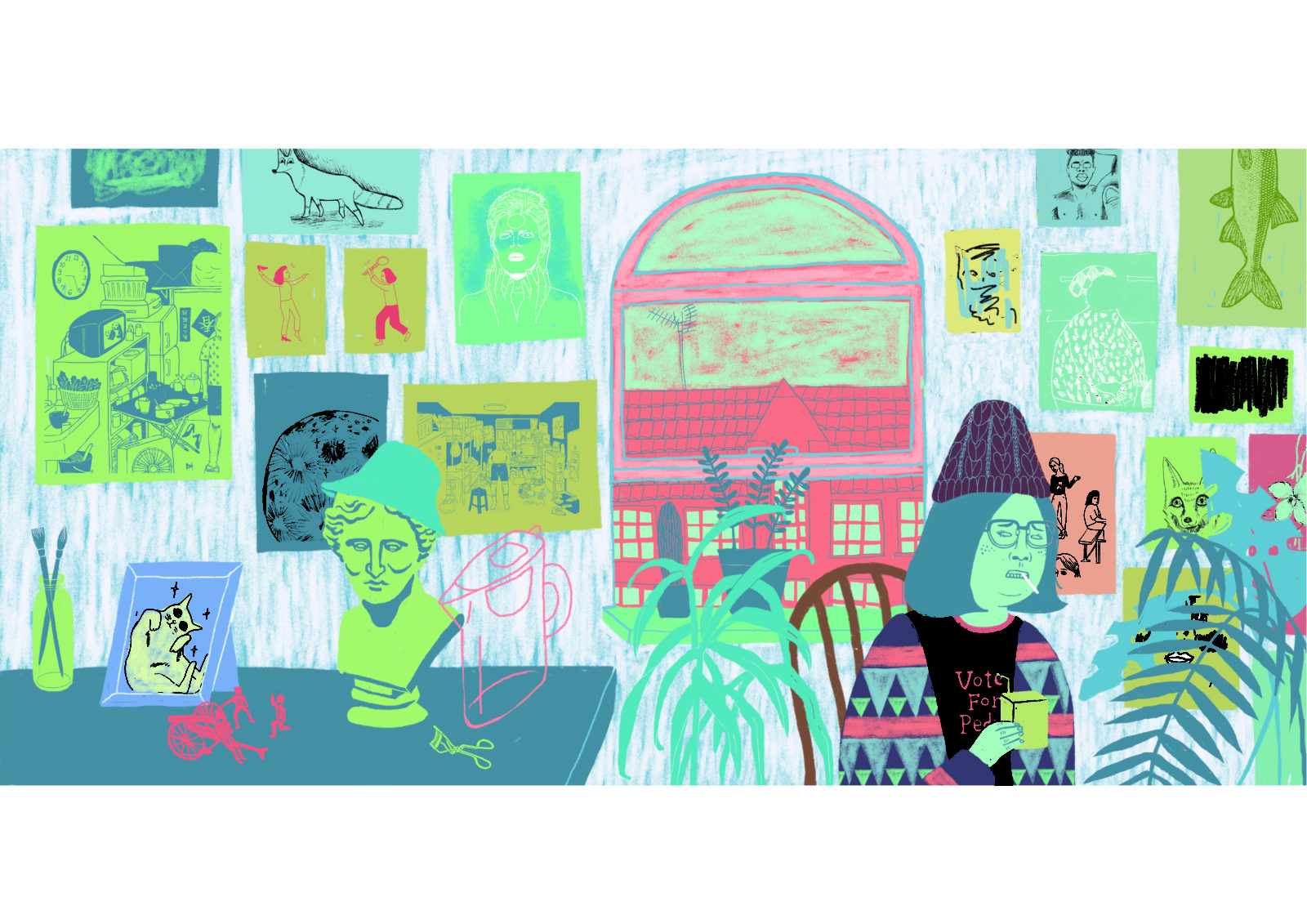 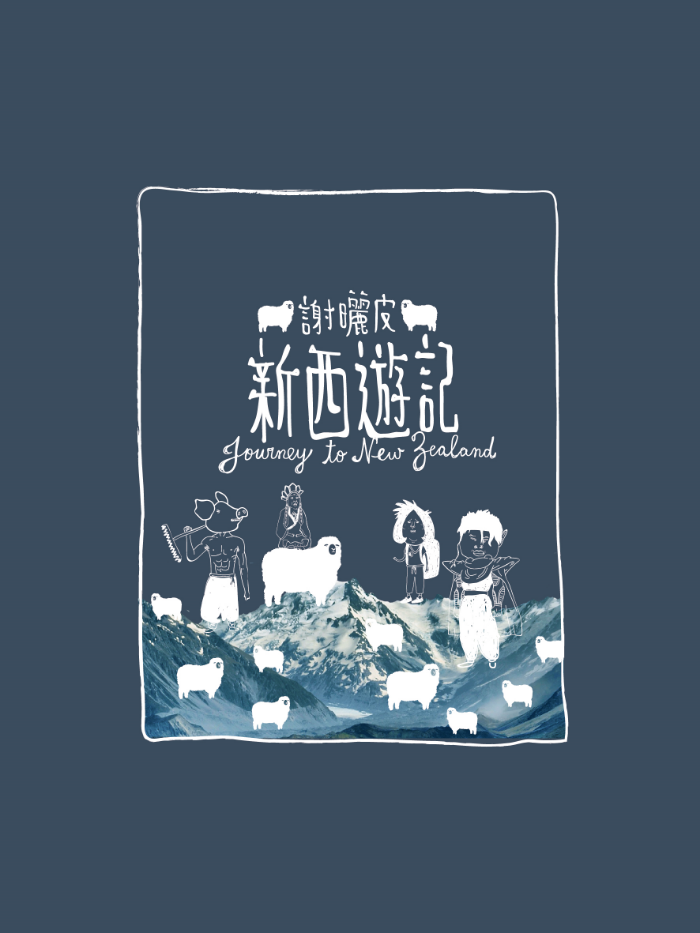 Tse Sai Pei, publication A Rendezvous with Myself Along the River Thames
2014