Intimate Portrait
Heterotopia in Art
Sze Mei-ting, Muses
2020
01
I like to create unconventional forms and textures with ceramics through different approaches, such as molding and wheel-throwing. The multi-facets of ceramics allow me to challenge myself every time.

Heterotopia is “the other space” – an existence that is both real and unreal, between physical space and utopia (virtual space). Besides cinema, museum and zoo, where else can we find heterotopia in reality?

Graduated with a Bachelor of Fine Arts at The Chinese University of Hong Kong (CUHK) and a Master of Arts Fine Art at the University of Reading (UK), emerging artist Sze Mei-ting, Muses (L7-21) has chosen ceramics as her primary medium for sculpture. Sze uses sculpture as her potent response towards different spaces. What would her ideal arts space look like? Perhaps her studio is an archetype of a heterotopia.

J: On your pursuit of the arts…

S: I started off studying 3D design, but eventually made my way to the Fine Arts programme at CUHK, where I was able to discover my strength in arts. With a keen sense towards 3D, I decided to specialise in sculpture.
I like to create unconventional forms and textures with ceramics through different approaches, such as molding and wheel-throwing. The multi-facets of ceramics allow me to challenge myself every time.

J: The biggest differences between studying arts in Hong Kong and the UK…

S: In Hong Kong, the bond between tutors and students is very strong and intimate. We keep in touch even after graduation. For example, I had the opportunity to learn from ceramicist and CUHK alumni Sara Tse after graduation. In Hong Kong, education is generally more inclined towards spoon-feeding, while in the UK it is more focused on academic freedom and proactive learning. Professors encourage students to delve into a topic they pick by themselves, and students are expected to be self-motivated and to dig deep with the resources available. Galleries and museums visits and internships during my time in the UK had been life-changing experiences for me.

I am lost without you cos you brought the sunlight

J: How have your perceptions towards arts changed over the years?

S: Arts is a form of practice and meditation for me. I used to fret over whether I could be a full-time artist or a successful one, which made me impatient and pushy. However, knowing that arts is a lifelong career and that true mastery of skills takes a lifetime, I learned to slow down and tune myself for the long journey ahead. Furthermore, the process of making ceramics itself cannot be rushed, with many considerations such as temperature and humidity that require trials and careful attention. After becoming a tutor, I noticed that my understanding of arts history and theories have been more comprehensive and in-depth, as I read them again while preparing teaching materials.

Something in your eye captured my soul

J: Your feelings on ceramics…

S: Before choosing ceramics, I explored other mediums such as fibreglass and wood. However, I realised that I am more at ease and comfortable when creating with ceramics. Ceramics offers infinite possibilities and tends to be more versatile. It could be practical as pottery or abstract as sculptures. There is still much to discover on the functions and forms of contemporary ceramic works. 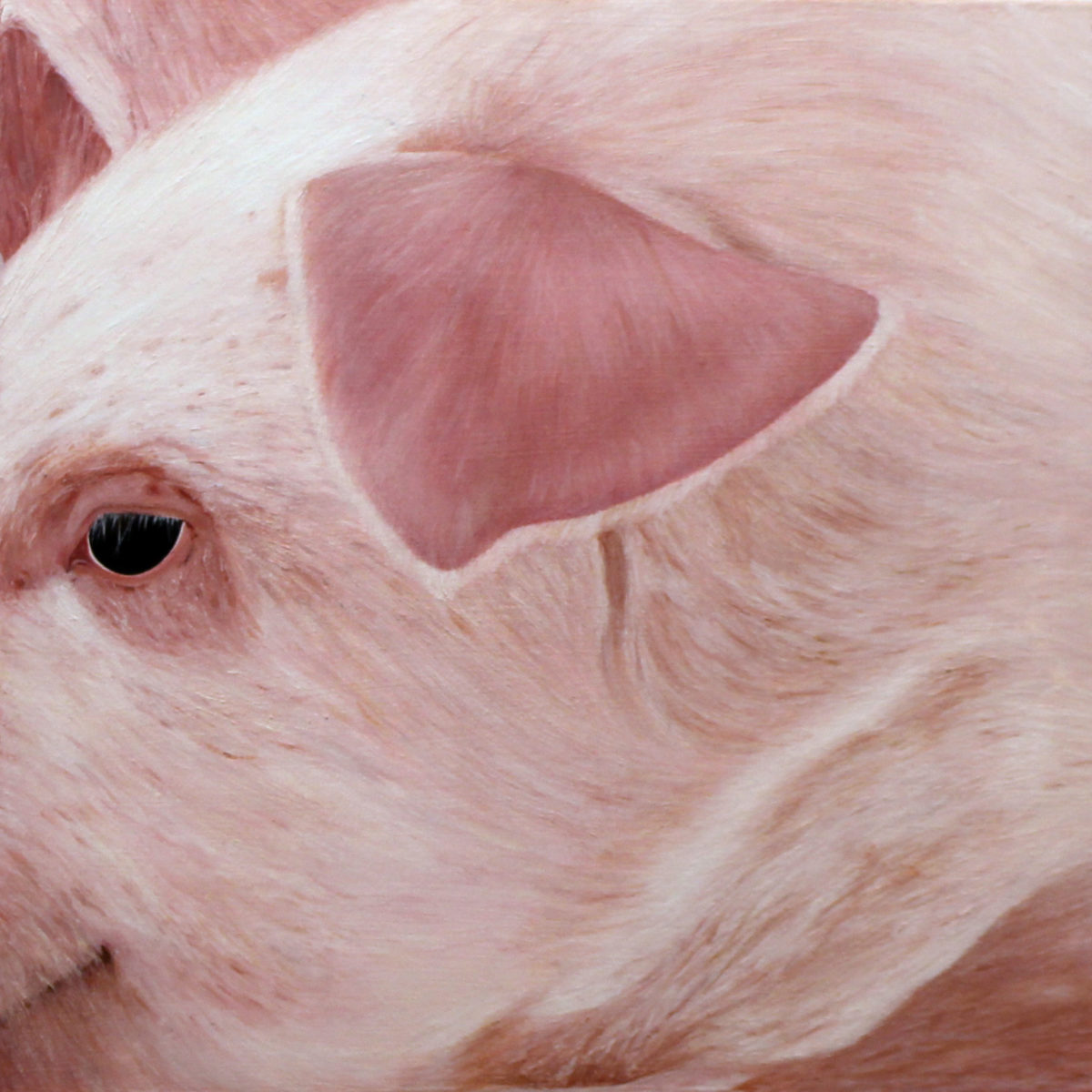 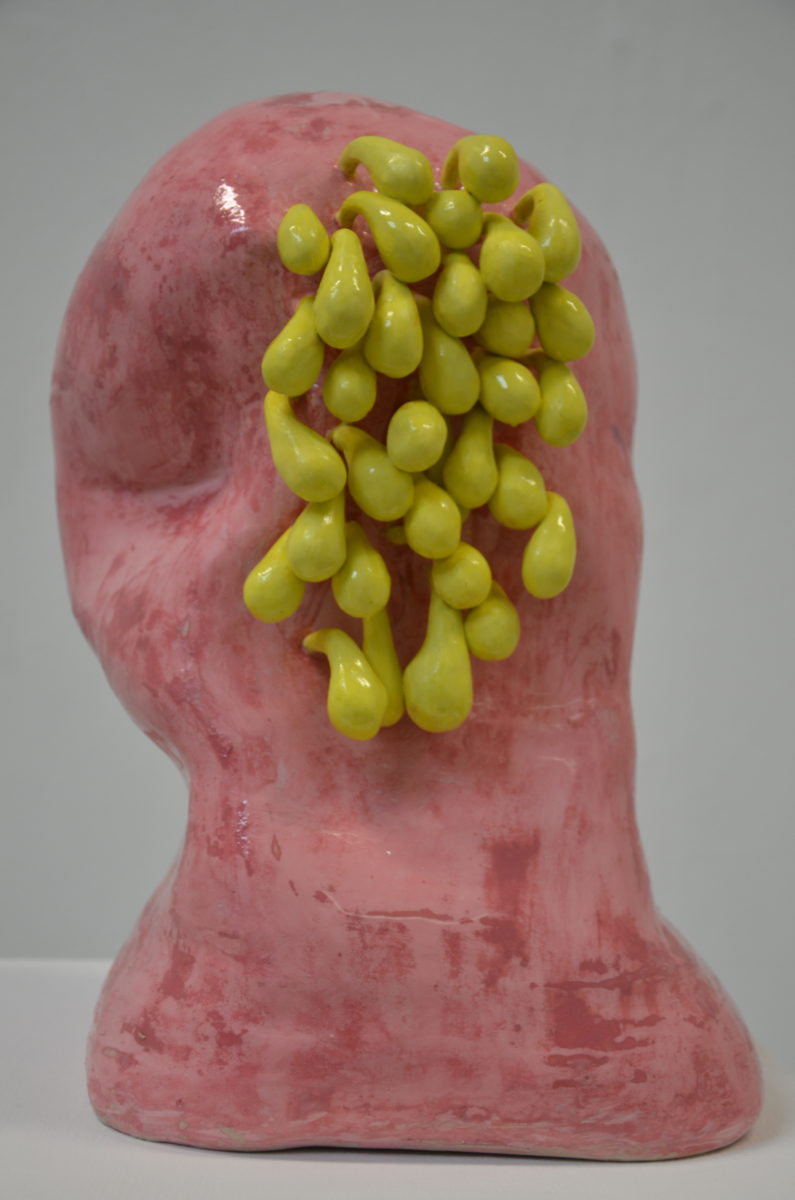 J: What motivates you to explore the themes of “animal rights” and “heterotopia”?

S: After watching some videos on the ins and outs of slaughterhouses during my undergraduate years, I decided to become a vegetarian. It also led to my creation of a series of works on animal rights, including this photorealistic oil painting. On the front, viewers see the portrait of a pig, while the edges show patterns of pork meat. It alludes to the fact that a pig, no matter how “cute”, will eventually be consumed one day. Nevertheless, more recently I tend to touch less on animal rights in my arts because I think writing about it and activism are probably more effective and suitable. Besides, I prefer my artistic creations be purer in essence.
Heterotopia is a concept elaborated by French philosopher Michel Foucault to address the differences between a real space and a utopian space, and to describe the otherness and significance when combining the two together. There are plenty of heterotopias around us, with zoo being an example. A zoo may look like a utopia for humans and animals, but in fact it is an illusion constructed in the realms of reality. An arts space also shares the same qualities between reality and virtuality. Therefore, I wish to challenge the boundary of this subject through the interaction between arts and space.

J: How does sculpture interact with space or audience?

S: When we look at a sculpture, it is not just about the “positive space”, but also the “negative space”. Thus, I will consider the placement of a sculpture when creating it. And my works are usually conceived as a series instead of a single piece. Although sculpture is stationary in nature, there are interesting interactions between components, and between an artwork and the audience. For example, the glaze on ceramics is reflective. When an audience moves in front of the ceramic work, the reflection of light and its dynamics will appear to give life and vibrancy to the work itself.

J: I understand that you were engaged in arts administration part-time at the Oi! arts space. What was the most memorable exhibition or arts programme you were involved in?

S: “Play to Change” was a rather memorable programme that spanned more than two years. We co-organised 19 exhibitions with 19 different groups of architects. I was mainly responsible for arts administration, as well as translation and editing of promotional materials. The biggest reward from this programme is a true understanding of community arts. I was also able to learn from the architects for their insight and ingenuity on the handling of spaces.

In the future, I plan to transform my studio into a co-working space with collaborators, as practice and exchange are important in learning ceramics. If I could provide the space and equipment for my ceramics students to practice, or my fellow artists to come and create their works, it will certainly do us all good.

J: Having recently established your studio in JCCAC, what is your impression of this arts space? What are your upcoming plans?

S: Before setting up studio in JCCAC, I had relocated often because of the high rent in Hong Kong. Therefore, I am well pleased to be allocated an affordable studio here, where I can comfortably create bigger piece that require more time and space. In the future, I plan to transform my studio into a co-working space with collaborators, as practice and exchange are important in learning ceramics. If I could provide the space and equipment for my ceramics students to practice, or my fellow artists to come and create their works, it will certainly do us all good.
I have also applied for the Emerging Artists Scheme under the Hong Kong Arts Development Council. If the application is successful, I will present a solo exhibition this year. My preliminary idea on the exhibition is “An Elegant Joke”, which is inspired by British humour and elegance. People in Hong Kong are sometimes too serious and do not seem to know that sometimes matters can be resolved in a joke. I would like to collect small jokes encountered in daily life for the exhibition, and the medium will not be limited to ceramics.

I am lost without you cos you brought the sunlight